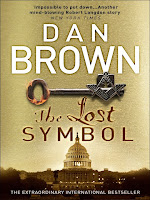 Rating: 2.5 stars
Format: eBook
Source: Bought on waterstones.com in August 2010
Genre: Thriller/Mystery
Published: 15 September 2009 (in eBook version)
The Synopsis
As the story opens, Harvard symbologist Robert Langdon is summoned unexpectedly to deliver an evening lecture in the U.S. Capitol Building. Within minutes of his arrival, however, the night takes a bizarre turn. A disturbing object–artfully encoded with five symbols–is discovered in the . Langdon recognizes the object as an ancient invitation… one meant to usher its recipient into a long-lost world of esoteric wisdom.

When Langdon’s beloved mentor, Peter Solomon–a prominent Mason and philanthropist–is brutally kidnapped, Langdon realizes his only hope of saving Peter is to accept this mystical invitation and follow wherever it leads him. Langdon is instantly plunged into a clandestine world of Masonic secrets, hidden history, and never-before-seen locations–all of which seem to be dragging him toward a single, inconceivable truth. The Review

Here comes the shameful truth: I both read and enjoyed The Da Vinci Code and Angels and Demons.
I know this may well undermine my opinions in the eyes of many forever more but I thought an explanation as to why I picked up this book would be sought – I know that it has been widely condemned as a mass-produced, over-hyped book. And yet still I went ahead and read it because, as I said, I liked the first two novels featuring Robert Langdon. Plus, reading an eBook version meant I could hide behind a glossy black piece of technology instead of having to cover a book with brown paper to avoid the glares of the literary community at large….
This started out much the same as the earlier two – Robert Langdon dashes to the rescue of one of his distinguished friends and finds himself embroiled in a mystery (usually involving at least a death or two and a good dismemberment..) that only he has the knowledge to solve. I know it’s a bit cheesy but I have no problem with a bit of cheese every now and then. So, we have Robert Langdon chasing down a deranged lunatic and facing down centuries old clues in the process – so far, so good.
At first I was a little annoyed by the constantly changing POV: there are sections from about 5 characters’, often mixed up in one chapter, and it can be a bit disorientating while you’re getting used to the characters themselves. After a while, it settled down though and I made my peace with this aspect.
What I failed miserably to reconcile myself with was the story itself – it’s weak, at best. The wide range of ‘clues’ that have been prevalent in Brown’s earlier novels (or those I’ve read…) had been trimmed down for this book. The focus is on one particular artefact and a couple of buildings. The unravelling is a bit too slow and I found the dialogue used to tease it out forced. And while I’m at it, there was a couple too many of those ‘Eureka!’ moments with the solution to puzzles just dawning on characters at convenient moments rather than being worked through.
As you can gather, I wasn’t keen on the story as it stood, largely due to the pace being all off. The final ‘nail in the coffin’, however, was that the main part of the story was over at approximately 480 ePages…the book ran to 567. So what filled the remaining pages? Hypothesising about the nature of the Masons’ secrets, excessive discussion between characters on the nature of God, whether mankind had lost its ability to appreciate the divine and ‘hidden’ aspects of Washington’s architecture. It really didn’t link to the story particularly well and I have no idea why it was tagged onto the end. I read it but I skimmed significant chunks – if I had wanted theology, it’s extraordinarily unlikely that I would have chosen Dan Brown to provide it…
To end on a positive note, the chapters are extremely short and punchy and good for reading on public transport, say, where longer periods of concentration aren’t possible. There are some interesting points about the Masons’ history and the story does have some exciting moments before the ‘secrets’ are revealed and we descend into philosophy. I was mildly entertained for the first couple of hundred pages and that’s why it got the stars it did. Also, just so you know, nobody has to say “I told you so…” – I’ve been punished enough…
Overall: I’d struggle to recommend this book, even to a Dan Brown fan. It’s haphazard and too long for it’s own good – there is a degree of ‘mystery’ but no real twists or secrets that made the first two so compelling. If you’re a die-hard mystery/thriller fan and into conspiracy theories, give it a try! But don’t say you weren’t warned…
And if you’ve forgiven me for reading that, thanks 🙂 In my defence, the TBR Dare I signed up to did say I had to read older books – I’ve had this a good six months so aim achieved!
While I remember, I should apologise to Dan Brown for not offering an objective review. I am in no way a professional reviewer and subjective is all I have 🙂 I did say I liked your earlier books, though, so please don’t pour any wrath on my blog. Thanks…
Previous