At Miss Qiunzilla Thiskwin Penniquiqul Thistle Crumpet’s camp for hard-core lady-types, things are not what they seem. Three-eyed foxes. Secret caves. Anagrams. Luckily, Jo, April, Mal, Molly, and Ripley are five rad, butt-kicking best pals determined to have an awesome summer together… And they’re not gonna let a magical quest or an array of supernatural critters get in their way!
The mystery keeps getting bigger, and it all begins here!
I loved Nimona when I read it earlier this year and I looked around pretty much straight away for anything else that Noelle Stevenson had been involved in.  This comic series is a collaboration between her, Shannon Watters and Grace Ellis and it has all of the humour and warmth that made me such a big fan of Nimona.  The dialogue is sharp and there are nifty puns abound.  The art is bright and vivid and fits with the feisty and fun characters.  It isn’t quite the style of Nimona because Stevenson isn’t the lead artist but it does have a similar quirky feel that I really like.

The first volume is a bit…odd and feels very much like a few opening issues that just happen to have been bound up together.  I read it on my phone on the Comixology app and when I finished, I honestly wasn’t sure if I’d maybe missed something and spent a while flicking backwards and forwards to see if I really had finished.  It sets up a few of the more unusual aspects of the overarching story but it’s a bit haphazard.  The second volume is much better.  The story weaves in some Greek mythology and develops some of the secondary characters, which helps the main characters feel less conspicuously one-dimensional.  More importantly, it feels much less like scene setting and more like a mini story arc.  I finished the second volume feeling much more fond of the whole series. 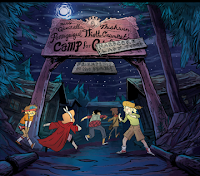 Reading the comics is entertaining and easy.  The pages fly by and they’re funny enough to elicit some genuine smiling and the occasional brief chuckle.  Not laugh out loud stuff perhaps but clever.  Personally, though, I find that they’re aimed at too young an audience for me to really get into them and want to collect them.  I would recommend them without a second thought to children of maybe 8ish to young teens.  I’d recommend them to older readers too but with a caveat that they can feel a little twee.  The peril is pretty mild and wraps up neatly and quickly in most cases.  There’s an overarching story that remains a bit of a mystery but generally each volume is pretty compact and a little predictable. 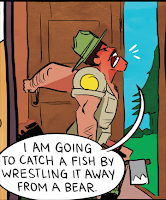 Minor grumbles aside, the focus of the comics is particularly fantastic for younger female readers; the main characters are a bunch of young women away at a summer camp who have formed tight friendships and who launch into adventures without a second thought.  Each of the girls has a unique skill set that means they can take it in turns to save each other without relying on a handily placed group of boys.  Traditional “manliness” is openly made fun of at some points but without crossing over into man-hating.  I love that the girls are almost never saved from danger but instead save themselves.  I’d rather they were a little less pigeon-holed (there’s a Smart One, a Brave One, an Athletic One etc.) but it works without being too annoying for the most part.  If you want to encourage independence and reliance on friends rather than a significant other, Lumberjanes really does seem like the way to go.

Overall:  I’ll definitely keep reading it but I’ll be keeping an eye out for it at the library or for the next volume to appear at a decent price on Comixology.  The stories are fun to read but not quite enough to live up to the £10+ per volume price tag of the later instalments.