Winter, 1661. In her short life Sadie Appleby has never left rural Westmorland. But one night she is rudely awoken by her older and bolder sister, Ella. She has robbed her employer and is on the run. Together the girls flee their home and head for London, hoping to lose themselves in the teeming city. But the dead man’s relatives are in pursuit, and soon a game of cat and mouse ensues amongst the freezing warren that is London in winter. Ella is soon seduced by the glitter and glamour of city life and sets her sights on the flamboyant man-about-town, Jay Whitgift, owner of a beauty parlour for the wives of the London gentry. But nothing in the capital is what it seems, least of all Jay Whitgift. Soon a rift has formed between Ella and Sadie, and the sisters are threatened by a menace more sinister than even the law. Set in a brilliantly realised Restoration London, The Gilded Lily is a novel about beauty and desire, about the stories we tell ourselves, and about how sisterhood can be both a burden and a saving grace.
Review

When I first finished this book a couple of weeks ago, I wasn’t at all sure how I felt about it.  The opening few chapters are a flurry of action but, once Ella and Sadie reach London, the story very quickly settles down and becomes more about the two sisters, what they have to do to survive and how their experiences change them.  There is a simmering tension underneath it all but it creates more of a sense of unease than excitement.  It took me a little while to realise that this is one of the book’s greatest strengths, rather than a weakness.  The story reads a little bit slower and it can seem repetitive occasionally but when I think about the queasy feeling I often had while reading, I kind of understood why.

Characterisation is where this book really shines.  The plot is solid but the characters are genuinely fascinating.  I know that reviewers talk a lot about the characters that they love because they have depth but what about those that you can’t love because they have depth?  Because they are so intensely flawed and inconsistent and unpredictably human that you can’t completely get behind them, even while your heart breaks for them.  Ella and Sadie both had incredibly traumatic childhoods and they take their traumas with them to London, where they continue to affect how they grow and develop.

Sadie is quite the tragic figure.  Taken away from an aggressive father and lured to London by her selfish older sister, Sadie struggles to blend in because of a birth mark on her face that makes her somewhat memorable.  If you’re trying to hide yourself from various people that probably want to hand you, that is obviously far from helpful.  I completely sympathised with her, I really did, but for every moment where my heart hurt for her, there was another where I shook the book a little bit and just wanted her to FIGHT.  Remember when I said that the characters’ traumas stayed with them, though?  Even while I desperately wanted Sadie to stick up for herself, I knew that if I’d been through everything she had, I probably wouldn’t be up for a fight either.  Likewise Ella, although she is less easy to love.

Almost inevitably, though, there were some things that I found disappointing.  Restoration England was an interesting period of English history (particularly when you consider how much is being made of our monarchy recently!) and I didn’t feel that this particular novel made the most of it.  There are some subtle references that are apparent when you know the exact year that the novel is set in (like the decreasing outward respect for the puritan characters) but I would be very surprised if many people (myself included!) would be able to pick out the time period if given this book “blind”, so to speak.  I don’t want a history lesson in my historical fiction but I do like to get a feel of the period that a book is set in, as opposed to just feeling as though I’m reading something set in the 16th/17th century.

The ending is also a little twee.  It was something that I had thought about during the book because I couldn’t quite see how Swift was going to deal with the fact that she had a criminal for one of her protagonists and an accomplice for another.  I can imagine that a lot of people will think that the ending is perfect.  Loose ends?  All dealt with.  Justice metered out?  I’m less convinced…

Overall:  If you’re looking for character-driven historical fiction, you could do a lot worse than The Gilded Lily.  If you’re in the mood for something that will drag you through the streets of London without leaving you time to breathe, this isn’t quite that book.  If you have a little more time and aren’t looking for love/action around every corner, give this a try. 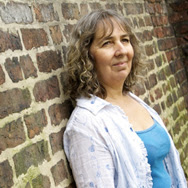 About Deborah Swift
Deborah Swift used to work in the theatre and at the BBC as a set and costume designer, before studying for an MA in Creative Writing in 2007. She lives in a beautiful area of Lancashire near the Lake District National Park.  She is the author of The Lady’s Slipper and is a member of the Historical Writers Association, the Historical Novel Society, and the Romantic Novelists Association.
For more information, please visit www.deborahswift.co.uk.