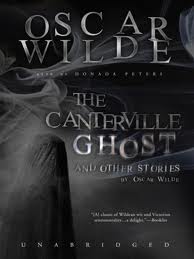 When I first got my eReader, I also got a promotional set of 100 eBook Classics.  This was one that I hastily uploaded on my first afternoon of eBook fever.  It’s languished in the ‘Unread’ collection ever since.  For some reason, I expected something of the same ilk as the darkly funny but intellectual The Picture of Dorian Gray.  While I did love that book when I read it earlier in the year, I’ve not quite felt the need to jump into what I thought might be something similar.
The story focuses on the plight of Sir Simon de Canterville, a blood-curdlingly terrifying ghost that persists in haunting his family’s manor, after a brash American family move in and disrupt his fierce solitude.  Try as he might, he finds himself unable to disturb them appropriately and finds himself shaken to his core and re-evaluating his malevolent existence.
I should say, before anything else, that this story is genuinely funny.  The narration is generally quite dry and sarcastic (which suits me down to the ground) while managing to be light and charming at the same time.
You won’t have to look too far behind the humour to find something more, either. The story might seem farcical now in a modern world full of technology to facilitate global communication and cultural diversity but, when the story was first published in 1887, the international backdrop was obviously quite different.  It’s a study in extremes, with the resident ghost clinging fastidiously to history and tradition and the Otises loudly exclaiming their successes, but it’s a brief and interesting snapshot of the dominant stereotypes of the late 19th century.  There’s also a lesson in forgiveness, if you really want to push it.
At a mere 65 large print ePages, this story will probably take you less than an hour to enjoy in one sitting and is well worth it!  Even if you aren’t in the mood for satire, there’s plenty of slapstick humour to get you chuckling, from Mr Otis recommending tonics to a vicious ghost for his clanking chains to his infant twins spitting peas at the brow-beaten nobleman while he struggles to menacingly dance the halls in an old suit of armour.
Plus, if you’ve never felt bad for a blood-thirsty murderer, you will do by the end of The Canterville Ghost!  That’s got to be worth something…
Previous

2011 Challenges: Some success and some idiocy