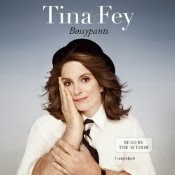 Tina Fey, one of the most powerful and beloved women in entertainment, brings sharp wit and uncanny observational skill to everything she does, from television to major motion pictures. She’s managed to be known as both the thinking man’s sex symbol, and every woman’s alter-ego/imaginary best friend. Now, for the first time, Fey takes her writing talent off-screen and into the pages of a audiobook. From her disastrous honeymoon cruise to the oversold joys of breastfeeding, from how to assemble the perfect female body to the working mom’s inner thoughts (when cleaning under the couch: eat the Cheerio, pocket the penny. Unless your sweatpants don’t have pockets…), Tina Fey puts her unique and endlessly funny mark on modern life, love, marriage, and motherhood.
Review
This week, I started my new job and with it traded travelling (and reading) on public transport for driving.  It’s been strange adjusting to not starting and finishing my day with a book so, after a couple of days of getting used to my journey, I decided to give an audio book a go so that I could still keep reading (sort of) even when I couldn’t curl up with an actual book/my Kindle.  I started with what I hoped would be an easy one that I already had stored from a free trial of Audible that I took up a little while ago and set off.  As it turns out, Bossypants was the perfect choice for an audio book novice.  It’s read by Tina Fey herself so it’s easy to listen to and almost immediately engaging because her chatty tone makes it feel like listening to a friend chatting through various awkward/funny/poignant moments from their life.
I imagine that the same is true of the “real” book.  I don’t read a lot of autobiographies (almost none, actually) because there a few people that I want to read/hear the life stories of.  It wasn’t really that aspect of Bossypants that I liked either but the telling of them.  The writing is relaxed and has an effortless kind of feel to it.  The humour is sarcastic and self-effacing – my favourite kind!  There’s something about Fey making fun of her dorky younger self that I think most of us can relate to and it doesn’t come across as at all insincere.
What I really love about Tina Fey after having read/listened to her book, though, is that her ideas about feminism are more or less identical to mine.  There’s a whole chapter about a photo shoot that Fey had and how, when the pictures were released, they had been photo-shopped so heavily that not only had they removed her “bad” features but that they had removed everything that made her look like a human being.  But, it wasn’t the fact that her face had been altered that really bothered her, just that it had been done badly:  ““Photoshop is just like makeup. When it’s done well it looks great, and when it’s overdone you look like a crazy asshole”.  There’s nothing wrong, Fey argues, with making photographs show the very best possible versions of ourselves.  It’s ok to want a picture to remove the odd open pore or patch of “armpit stubble” and it doesn’t make you any less of a feminist.  Not only were the descriptions of the shoot itself funny but I did find myself nodding along in my car to to her consideration of whether or not photo-shopping is really what is causing young people to have unrealistic ideas about how they should look because nobody really believes in it any more.
And that kind of sums up why I’ve really enjoyed this audio book:  not only do I find Tina Fey really funny, I also find her interesting to listen to.  There’s not much more that I feel as though I have to say about this, really.  It’s Tina Fey recounting her at times cringe-inducing experiences and talking about how she has managed to succeed in what remains the male-dominated world of comedy.  If you like her, you’ll love it.  If you don’t, you probably won’t.  As an added bonus, if you want a cheeky little reminder of why it’s cool to be a feminist, Bossypants is a great place to start.  Not only will you come away from it feeling like the business, you’ll get a few chuckles for good measure.
Overall:  If you’re a fan of 30 Rock or have watched anything that Tina Fey has written and enjoyed it (including the 2004 classic Mean Girls, apparently…), I’d recommend this book (audio or otherwise) without thinking twice.  Fun, friendly and generally good for a giggle.  Buy it, enjoy it and pass it on to your friends.
~~~~~~~~~~~~~~~~~~~~~~~~~~~~~~~~~
Date finished: 21 February 2014
Format: Audio book
Source: Bought
Genre: Autobiography; Humour
Pictured Edition Published: by Hachette Audio in April 2011
I have no idea how I’m going to fare when it comes to actually getting to know characters or places but I think I’m sold on audio books – any recommendations gratefully received!
Previous