Published: Originally published in 1994; Published by Consair (in English) in September 2011

The Synopsis [taken from Waterstones.com]

In the winter of 1991, at a concert in Krakow, an older woman with a marvelously pitched violin meets a fellow musician who is instantly captivated by her instrument. When he asks her how she obtained it, she reveals the remarkable story behind its origin…Imprisoned at Auschwitz, the notorious concentration camp, Daniel feels his humanity slipping away. Treasured memories of the young woman he loved and the prayers that once lingered on his lips become hazier with each passing day. Then a visit from a mysterious stranger changes everything, as Daniel’s former identity as a crafter of fine violins is revealed to all.
The Review 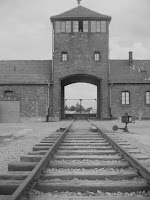 In 2008, Boyfriend and I went to Krakow (and the photos scattered around this review are ones that I took while there).  I was continuously surprised by the city.  It was architecturally beautiful, because World War II was over before it could be invaded and destroyed (unlike, say, Warsaw).  It was kooky and fun with adorable boutique-style restaurants and bars (we spent one evening drinking in a bar where all the tables were renovated Singer sewing machines, for example).  We had already decided that we would visit Auschwitz Birkenau and I thought that would be at least one part of the trip where I knew what to expect.  I knew it would be an emotional day and I knew it would be humbling and would put all of our “problems” into perspective; I just didn’t know how emotional and humbling it would turn out to be. 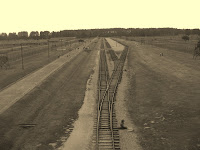 The scale of the site and the associated horror was for me almost incomprehensible; almost as though it is simply too much to process.  The part that had the biggest impact on me (and that made me cry) was a corridor filled with framed photographs.  Each photograph was a simply shot picture of a woman/man/child in a blue-and-white outfit looking straight at the camera. To this day, recalling the haunted/terrified/devastated looks in the hundreds of sets of eyes can bring me to tears.

This book is the literary equivalent of those photographs.

It’s a snapshot of a tragedy that allows you to forget the statistics and remember that those catastrophic numbers were made out of individuals and families who had their own worries, their own battles and their own hopes.  Daniel’s story is a tiny part of a huge attrocity.  I think that too often authors attempt to convey the magnitude of the Holocaust and try to impress their readers with the horrifying numbers.  In the end, though, most of us can’t really imagine it or understand it.  Or at least, I can’t.  What we can understand, however, is Daniel’s sense of loss and hope, his physical and emotional torment and his daily fight to survive.

The story is told very simply, as you would expect for a book narrated by a prisoner in a concentration camp.  Daniel is a wonderful character and I’m sure there’s something in him for most readers to identify with, which I took to be part of the point.  And in case you were concerned that this would be too introspective, his fictional endeavours are painted against a backdrop of fact.  Indeed, on one of the first pages of the book is the statement:

“Author’s Note:  The documents at the beginnings
of the chapters are authentic“

These excerpts are extremely well chosen and timed and the balance of Daniel’s emotional narrative with terrifyingly clinical documents is perfect.  Because of this elements, I think that it would be nigh impossible to read this book without having at least one moment where you flinch/look away/sneak away to guiltily remind yourself how lucky you are – I know that I did and it was part of what made the book such a powerful one for me.

In a way, because of the strengths of the book, I was disappointed by the ending.  I know that sounds strange given the subject matter so I won’t say any more than that.  I wouldn’t want to ruin it for anybody that wants to pick this up and it could well just be me. Don’t let it put you off and do let me know if you read this and have any particular thoughts on the matter.

Overall:  There isn’t much more to say; only that, despite the vocabulary and sentence structure being relatively basic, this book is obviously not an “easy read”.  It is a short book that I think will stick with me for a long time and one I would certainly recommend.

It's Monday! What Are You Reading? #2