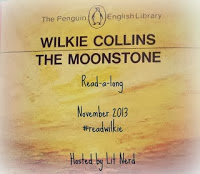 So that was The Moonstone.  The impression on Twitter and in the posts of those people that managed to actually wrap up their reading on time was that it was pretty flipping brilliant.  In fact, I don’t remember seeing a single negative comment about it, which is pretty impressive for a detective story from the 19th century!

If you haven’t read The Moonstone yet, there will be SPOILERS AHEAD! I will be talking about the final half of the book and if you don’t know the ending, this will RUIN IT for you!  The ending is the best so don’t ruin it for yourself, look away now and go and get your hands on a copy of your very own!  SPOILERS are coming up…

What’s been going on since we posted about the first half?
After much drama and excitement during the first half about pretty much everything but the Moonstone, the second half really got stuck back into the mystery.  After Mr Bruff’s seemingly random (that was obviously later proven to be not random at all) narrative, Franklin Blake popped up to solve the mystery of Roseanna Spearman, the mystery of the nightgown and, in some ways, the mystery of the Moonstone.  We also got some handy tip offs on why Rachel had spent so much time being so annoying, which stopped her feeling like as much of a pest.
Ezra Jennings, the unlucky man whose piebald hair is apparently worthy of much comment, shines a light on some of the strange happenings (more on that later…) to make up in some way for Dr Candy having abused his position by spiking Franklin’s drink.  Actions ratchets up and I got the answers to all of my questions in a perfect package.  Oh, and there was more from the book blogger’s favourite, Gabriel Betteredge.  He’s arguably a big racist as well as being quite the sexist but he manages to do it without upsetting everybody so it’s amusing instead of grossly offensive.  Betteredge seems to dislike Jennings just because he looks different and shifty but I was so amused at his ridiculous protests at having to work with him that I never seemed to find occasion to bristle with indignation.
Science and medicine in the 19th century
There were a few chapters where I thought that The Moonstone had lost its way and that my love would be tempered.  I loved Ezra Jennings as a narrator because he was about the only discreet and geuinely well-meaning character in the whole book but I wasn’t convinced by his experiment.  In many ways, The Moonstone hasn’t dated much.  Putting aside the fact that people don’t really wear gigantic diamonds as necklaces or tend to have rafts of servants to cater to their every whim, the writing is accessible and the dialogue is witty and entertaining.  I sometimes think it’s amazing that so much time can pass and a book can still be very readable and relevant.  People haven’t changed that much.  Science, however, has come a long way.  Never mind that Mr Candy would have been sued and/or incarcerated for medical malpractice for intentionally doping the locals at dinner, Mr Jennings’ opium experiment failed to really grab me.  Did people really believe that sort of replicating the circumstances of a year earlier would provoke an almost identical reaction?  I don’t know. I do know, though, that the whole “Franklin did it but he didn’t really because of drugs and SCIENCE” bit didn’t really do it for me.  Sorry, Wilkie.  To be fair, that’s my only criticism and didn’t stop me giving the book 5 great big, shiny stars.
Whodunnit?
Blonde Ellie managed to figure it out ahead of time but I am an inferior detective and didn’t have a clue.  What can I say?  I am blinded by ostensibly charming 19th century gentlemen!  Either way, I was thrown off by the Franklin Blake revelations and the ending was a surprise to me.  I kind of prefer it that way, to be honest.
Thank goodness that Sergeant Cuff is made of sterner stuff than me.  I’m sad that he didn’t feature more but he gets kudos for doing the whole “writing down who did it so he can be proven right later” play.  I feel a craving for some Sherlock Holmes…
THE ENDING
This is where I took back my slight moanings about odd experiments and went from just really liking The Moonstone to loving it.  Hanna and I were talking about the book when we were both about halfway through and she actually said something like “Why is everybody ignoring the fact that the Moonstone was stolen from India in the first place?”.  Except probably in a way that wouldn’t fit quite so neatly into the point that I’m making.  Sorry, Hanna, you have been paraphrased for my ease.  Basically, though, I couldn’t agree more and I can’t think of an ending that I would have preferred, anything that I wasn’t completely bowled over by or anything that would have been a more shining example of how clever a writer Wilkie really was.
Nothing in this book is incidental and nothing is wasted, which for a book of 620 pages is really saying something.  I’m a complete Wilkie convert and The Woman in White is high on my list for 2014.
Thank you so very, very much to Ellie Lit Nerd for hosting – 2013 has been much improved by the presence of some Wilkie Collins and The Moonstone is a winner!  THANK YOU! 🙂
Previous

A Tale of Two Cities Read-along: Books 1 and 2