Over the past few weeks, a whole host of challenges for 2013 have been emerging and waving their little challenge-y arms around to lure in unsuspecting bloggers.  Before I get all carried away and sign up for some, I thought it was about time that I drew a line under those that I gallantly signed up for this time last year.
To complete the challenges that I signed up for (including my GoodReads target of reading 75 books this year), I’d have to read a grand total of 43 books in December.  Even if I were to quit my job and stay at home all day everyday, I still wouldn’t be able to read enough books!  Hence my bowing out early…
CHALLENGE #1:  The League of Extraordinary Gentlemen Challenge
hosted by Hanna @ Booking in Heels

I was the most excited about this challenge and the books that I’ve read out of the bunch (albeit maybe not this year…) are fantastic!  It’s a list that I really do plan on keeping hold of and will hopefully finish some time during 2013.  They coincide nicely with my aim to read more literary/classic fiction next year.  Anyway, the challenge was to read the stories that inspired the quirky characters in the film ‘The League of Extraordinary Gentlemen’ during 2012.  The 9 books were:
1.  King Solomon’s Mines by H. Rider Haggard (Allan Quartermain)
2.  Dracula by Bram Stoker (Mina Harker)
3.  20,000 Leagues Under the Sea by Jules Verne (Captain Nemo)
4.  The Adventures of Tom Sawyer by Mark Twain (Tom Sawyer)
5.  The Picture of Dorian Gray by Oscar Wilde (Dorian Gray)
6.  The Strange Case of Dr Jekyll and Mr Hyde by Robert Louis Stevenson (Dr Jekyll/Mr Hyde)
7.  The Invisible Man by H.G. Wells (Rodney Skinner)
8.  The Phantom of the Opera by Gaston Leroux (The Phantom)
9.  The Final Solution by Sir Arthur Conan Doyle (James Moriarty)
I read Dracula by Bram Stoker (review here) towards the end of 2011 and Hanna being the kindly soul that she is allowed me to count it.  I read Phantom of the Opera by Gaston Leroux back in July but was too busy chastising myself for how far behind in reviewing to actually write a review.  I will post on before the end of December so that I don’t end up with my “official” total being ONE.
I have read The Picture of Dorian Gray by Oscar Wilde (review here) and The Strange Case of Dr Jekyll and Mr Hyde by Robert Louise Stevenson (review here) during the lifetime of Lit Addicted Brit and had meant to post something to freshen up the reviews but…well, you know how it is :-/
Sorry, Hanna!!
CHALLENGE #2: The 2012 TBR Pile Challenge
hosted by Adam @ RoofBeamReader

This is probably the challenge that would have been the most “valuable” to complete because I have some almost certainly truly great novels sat patiently on my shelves that for an array of rubbish reasons I never seem to get to.  Looking back over the list that I put together, I have been an idiot not to get to any of them.  Maybe my mistake was not looking back at my list often enough, because now that I have, all I want to do is rush upstairs and grab one of these and get stuck in.  I might be a little bit cheeky and use the exact same list for 2013 but actually READ them this time!  There’s an outside chance that we might be moving house and if we do, I’m fairly sure that my money will be going on paint and soft furnishings, rather than books…
1.  The Dragonbone Chair by Tad Williams
2.  The Swan Thieves by Elizabeth Kostova
3.  Wolf Hall by Hilary Mantel
4.  The Night Watch by Sarah Waters
5.  The Boy I Love by Marion Husband
6.  The Girl With The Dragon Tattoo by Stieg Larrson
7.  Arthur and George by Julian Barnes
8.   Dark Angel by Sally Beauman
9.  A Changed Man by Francine Prose
10.  December by Elizabeth H. Wainthrop
11.  The Memory Keeper’s Daughter by Kim Edwards
12.  Random Acts of Heroic Love by Danny Scheinmann
I might get to one before the end of this year but it’s more likely that these will be rolling on to 2013…
CHALLENGE #3: A Classics ChallengeHosted @ November’s Autumn 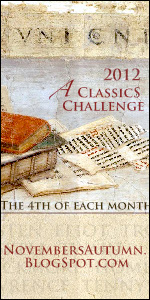 Again, this is one that I was super excited about.  I meant to read more classics this year but never really got enthusiastic about that aim until later in the year.  After a little break over the summer and a few misguided bookish choices, I read The Secret History by Donna Tartt (review here) and had an “OH MY GOSH – THIS IS WHY I READ” moment that re-kindled my desire to read some wonderful literary/classic fiction.  I’m thinking of signing up for the super aim of reading 50 classics in 5 years but whether I do or I don’t, the following will be ones that I WILL GET TO.  Soon.
1.  The Count of Monte Cristo by Alexandre Dumas
2.  Crime and Punishment by Fyodor Dostoevsky
3.  Tess of the D’Urbervilles by Thomas Hardy
4.  Slaughterhouse-Five by Kurt Vonnegut
5.  1984 by George Orwell
6.  Turn of the Screw by Henry James
7.  The Scarlet Letter by Nathaniel Hawthorne
Soon.
So that’s the catalogue of my failures this year!  I’m not too sad about it because May/June were strange months that had a more lasting impact on my reading than I’d anticipated even at the time.  I’ve got back into reading really fantastic books over the past couple of months and am genuinely looking forward to whatever 2013 has in store!
What about you?  How have you fared in the reading challenges that you took on?  I hope a little more successfully than me!!  🙂
Previous