Putting aside my general horror that it’s already time for 2012 challenge posts for a moment, I wanted to post my sign-up to The League of Extraordinary Gentlemen Book Challenge 2012 hosted at Booking in Heels before it got to January and I realised that I’d forgotten…
I couldn’t put it better than Hanna herself so, straight from the sign-up page, is a summary of the challenge:

Welcome to the first ever book challenge hosted by Booking In Heels!This is a challenge I’ve not seen anywhere else and was something I was planning to do on my own next year anyway, so I figured the more the merrier!For those who don’t know, The League of Extraordinary Gentlemen was a film released in 2003 based on a graphic novel by Alan Moore (of Watchmen fame). The movie features various classic book characters who all form a League to stop various classic villians from taking over the world. Your mission, should you choose to accept it, is to read the original book featuring each of the main characters and post a review of each between 1st January 2012 and the 31st December. Every single one of these books is out of copyright (which is how they could be used in the first place) and so are free for download on most e-book readers. Even if you don’t complete the challenge, it’s great fun watching the film and knowing a little more about the characters! The main characters and their books are:Allan Quatermain from King Solomon’s Mines by H. Rider Haggard

Allan Quatermain actually features in a number of books by this author, but King Solomon’s Mines is the first. It tells of a search of an unexplored region of Africa by a group of adventurers led by Allan Quatermain for the missing brother of one of the party.  Quite obviously, he’s played by Sean Connery in the film.Mina Harker from Dracula by Bram Stoker

Mrs. Harker is the only woman in the League. As the widow of Jonathon Harker, she is left with vampiric abilities that come in useful when dealing with nefarious plots to take over the world.She’s played by Peta Wilson.

Captain Nemo from 20,000 Leagues Under The Sea by Jules VerneNemo is the enigmatic Captain of the Nautilus, the technologically advanced submarine that provides transport for the League.I read this book earlier this year (looks like I’ll be rereading it next year…) and loved it.

Tom Sawyer from The Adventures of Tom Sawyer by Mark TwainSawyer is my least favourite member of the League and the last member to join. As a young American go-getter, is adopted as a kind of protege by Quatermain.He’s played by Shane West, I believe.

Dorian Gray from The Picture of Dorian Gray by Oscar WildeExcuse me while I run off to drool… If I could nuzzle and lick this man, trust me I would. Anyway, this is Dorian Gray and his Picture.In the film, Mr. Gray is played by Stuart Townsend and is a snide, suave, sophisticated cad who is only roped into the League to get closer to Mina.Dr. Jekyll and Mr. Hyde from The Strange Case of Dr. Jekyll and Mr. Hyde by Robert Louis Stevenson

This is probably the most famous book used in The League of Extraordinary Gentlemen, but it’s an excellent one. Dr. Jekyll (right) is an innocuous, moral Doctor until he takes a formula of his own invention which transforms him into the violent, brutal Mr. Hyde (right).His/their services are offered to the League in return for a pardon for their crimes committed in London.Played by Jason Flemyng in the film.  Rodney Skinner from The Invisible Man by H.G. Wells (kind of)

Skinner is the only member of the League not to be taken directly from the pages of a book. The Invisible Man is still copyrighted so the characters from that book couldn’t be used directly. Instead, Skinner claims to have stolen the Invisibility Formula from the character in the book, which makes it all nice and legal.The Phantom from The Phantom of the Opera by Gaston Leroux 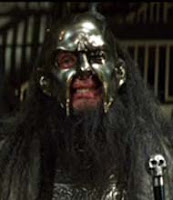 And now we’re onto the villains. Yay villains!I love how they’ve done the Phantom in the film – it’s a step away from the traditional white mask and black cape combo. It just works so well.James Moriarty from The Final Problem by Sir Arthur Conan DoyleThe ultimate baddie, the mastermind behind it all, the ‘Napoleon of Crime!’No photo for this one, but if you’ve seen the film, you’ll know who I mean.Right then. That’s nine books to read in twelve months.

————————————————————————
I’m not the fastest, as you may have noticed, but there are more than a few books on this last that I really want to read so I figure it’s well worth squeezing these 9 into 2012.  Plus, it gives me an excuse to dig out the film again!  Every time I’ve watched it in the past, I’ve annoyed my boyfriend by bleating/wondering about who is who and who wrote them and what book they were in. Now at least I won’t be doing the wondering part!
Even if you’ve never seen the film, the books that it draws from look awesome so go over and sign up!  🙂
Previous

Review: ‘The Way of Shadows’ by Brent Weeks

It's Monday! What Are You Reading? #3