In 2014, Hanna bought me Relish by Lucy Knisley for Christmas.  I read it in January and was kind of surprised by how much I liked it.  Laura helped me continue my foray when she bought me French Milk, also by Lucy Knisley.  I might not have reviewed it but I did really like it and it made me want to branch out and try some graphic novels not written by Lucy Knisley.  And then Bex (aren’t book blogger friends great?!) bought me the first volume of the Fables comics for my birthday and it was so much fun.  What can I say?  I’ve kind of caught the graphic novel bug.  On a whim over Christmas, I headed over to the Book Depository and bought up most of the graphic novels on my wishlist…whoops? 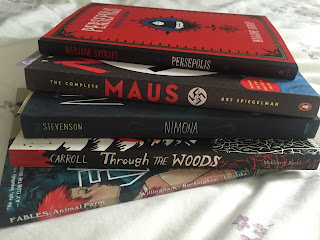 Ok, so the pile might scream ‘Graphic Novels for Beginners’ but I’m pretty damn excited. 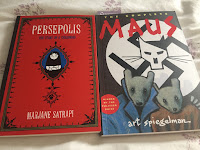 First up is Persepolis by Marjane Satrapi.  Told in black and white comic strips, this is the story of Satrapi’s childhood in Tehran during years that (according to the blurb) “the overthrow of the Shah s regime, the triumph of the Islamic Revolution, and the devastating effects of war with Iraq”.  It sounds utterly fascinating and I’ve heard that it’s also very witty and very moving.  It’s not the glossiest on my pile but I’m really looking forward to it.
Sticking with the ‘moving’ theme, I also got The Complete Maus by Art Spiegelman.  I’ve been curious about this for years and finally took the plunge and bought it.  I’m sure you’ve all heard of it but, in case you haven’t, it’s written and illustrated by a man whose father was a Jewish survivor of the Holocaust and tells of the horrors of the holocaust by depicting the Nazis as cats and the Jewish population as mice.  The book won a Pullitzer prize and I have extremely high hopes for it, even while I’m wary to start out on what promises to be quite a harrowing journey. 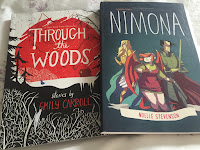 Through the Woods by Emily Carroll is another book that I’ve heard a lot about.  The paperback copy that I have is gorgeous.  The cover has a gnarled feel to it and the drawings are stunning.  It also promises to be seriously creepy, featuring five stories set around journeys in to or out of the woods.  Patrick Rothfuss’ review on Goodreads sums up with “This freaked my shit out”.  I’m intrigued and I’m going to brave my wimpy instincts to explore these “fairy tales gone seriously wrong”.
Lightening the bundle up is Nimona by Noelle Stevenson, which honestly just sounds like it will be so much fun.  It has a quote from Rainbow Rowell on the front for heaven’s sake that declares the story “full of humour and heart”.  It’s the story of a young girl, Nimona, who is sent by an agency to be the sidekick to Lord Ballister Blackheart, a supervillain.  I’ve heard that it’s sharp and that there will be chuckles.  From a quick flick through, the illustrations look bold and colourful and I can’t wait to get stuck in.  The back of my copy shouts about “Nemeses! Dragons! Science! Symbolism!” Yes, please. 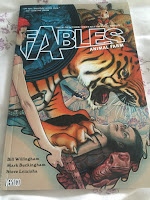 The last new arrival is the next instalment in the Fables series, Fables: Animal Farm (Volume 2) by Bill Willingham.  This series seems pretty popular among the bloggers that I follow and if they carry on in the vein of the first instalment, I can see why.  They’re pretty expensive (although this one is actually £3 cheaper now than it was when I bought it) so I’ll probably be taking the series pretty slowly and won’t be picking this one up straight away.  I could obviously borrow them from the library (I say ‘obviously’…I haven’t checked…) but now that I have a couple, I kind of want to collect them all.  The illustrations are super detailed and they’re quick to read so they’re the kind of thing that I can see myself flicking back through when I’m further through the story.
And there you have it!  Which ones do I need to be picking up sooner rather than later?  Anything else that I need to be picking up to add to my fledgling collection?
Previous

Bout of Books: Sunday and Wrap-Up

Review: 'The Collector' by John Fowles