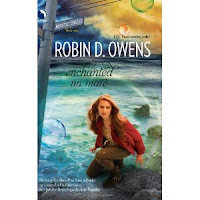 As one of the last surviving Mistweavers, half-blood Jenni knows what it’s like to be caught between two worlds: the faery and the human. But the time has come to choose. The Lightfolk require her unique talent for balancing the elements to fend off a dangerous enemy—and rescue her missing brother.

Only for Rothly will Jenni deal with those who destroyed her life. Only for him will she agree to work with her ex-lover, Tage, and revisit the darkest corners of her soul. For a reckoning is at hand, and she alone has the power to hold back the forces of dark….

As is somewhat obvious, I finished this book a couple of weeks ago but haven’t had the chance to write a review I’ve liked yet. I wrote one that waffled…deleted it in a strop…regretted it when things went crazy at work and I had no time to re-draft…and here we are! I came away from this book feeling rather positive and remember it as being a fair read but in response to the acid test of “Who would I recommend it to?” that often helps me gauge my reaction, I drew a blank. So a mixed one really…

One thing I really liked about this book was the use of elements; the idea that everything is made up of a certain balance of fire, water, earth and air and certain beings are more in tune with certain elements. There was a touch of New Age philosophy about it but it was integrated into the story well and was a nice slant on magic. The imagery is bold and fills the story with colour that matches the nature theme perfectly.

The idea for the plot is quite good but, for me, it ended up feeling a bit repetitive. I’m inclined to think that’s largely as a result of the characters – I never thought I’d be annoyed by somebody whose entire family has been killed but Jenni and Rothly both manage to be somewhat…irritating. Jenni has mourning guilt while Rothly has vengeful anger. I sympathised, sure, but was also wishing they’d at least try to move forward. It does get better but in a ‘chick flick’ fashion rather than in a gritty, emotional way.

And a couple of last thoughts: the tone of this book is hard to pinpoint – at times, I felt like I was reading a YA/children’s book (brownie housekeepers and travelling through trees etc…) but then at others, there were some characters getting their raunch on. Makes it a difficult one to recommend to any specific point on the age spectrum, all in all.

Finally, there are, you will be pleased to know, some ‘bad guys’ to provide mild peril and thwarting opportunities (although for some reason they smell like “old bubble gum” – whoever would have guessed?). Again linking to the above-mentioned tone, these bad guys do have a taste for some pretty grim violence involving some spillage of blood – if you’re of a very queasy disposition or are thinking of passing this to young kids, probably something that you’ll want to bear in mind!

Overall: This was a sweet story with some cutesy magic going for it – I wouldn’t necessarily be rushing out to grab other books by this author but I enjoyed this one and didn’t have a problem finishing it. It’s bright and colourful and made me wish for summer (possibly the beach scenes…) so it’s a nice one to cheer up a dim day.