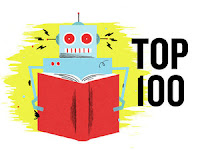 Back before I admitted I was a nerd, I used to lurk around bookshops and do this no doubt tremendously obvious skulk near the Fantasy section, pretending not to look but trying to check out my favourites. I know, quite the sorry picture isn’t it?!

A few years later, I grew up and realised I was wasting my energy. Plus, Amazon made it so much easier to indulge in the pre-purchase research while I was still stretching my fantasy-geek-wings! Now, of course, I’ll hang out in that section of the bookshops/libraries all day if allowed SO what have I managed to read in that time?

I saw this list over at I Read That Once – it’s a Top 100 of Science Fiction and Fantasy as voted for by 60,000 like-minded bookish folks at the National Public Radio. Yes, another Top 100 list. BUT in my defence:

1. I’m curious as to whether I’ve spent all these years reading the same Sci-Fi/Fantasy as everybody else; and,

2. I have so far largely resisted Top 100 lists but could only hold out for so long!

So here we are: those in bold green are ones I’ve read; those in bold blue are those I have but are yet to read…(Also, I know that they should be listed the other way around but I really can’t face flipping them over…sorry, guys…)

1. The Lord Of The Rings Trilogy, by J.R.R. Tolkien

2. The Hitchhiker’s Guide To The Galaxy, by Douglas Adams

4. The Dune Chronicles, by Frank Herbert

8. The Foundation Trilogy, by Isaac Asimov

11. The Princess Bride, by William Goldman

12. The Wheel Of Time Series, by Robert Jordan

17. Stranger In A Strange Land, by Robert Heinlein

18. The Kingkiller Chronicles, by Patrick Rothfuss (well, I’ve read the first one…)

21. Do Androids Dream Of Electric Sheep?, by Philip K. Dick

22. The Handmaid’s Tale, by Margaret Atwood

25. The Stand, by Stephen King

27. The Martian Chronicles, by Ray Bradbury

29. The Sandman Series, by Neil Gaiman

30. A Clockwork Orange, by Anthony Burgess

32. Watership Down, by Richard Adams

34. The Moon Is A Harsh Mistress, by Robert Heinlein

35. A Canticle For Leibowitz, by Walter M. Miller

38. Flowers For Algernon, by Daniel Keys

40. The Chronicles Of Amber, by Roger Zelazny

41. The Belgariad, by David Eddings

42. The Mists Of Avalon, by Marion Zimmer Bradley

43. The Mistborn Series, by Brandon Sanderson

45. The Left Hand Of Darkness, by Ursula K. LeGuin

51. The Hyperion Cantos, by Dan Simmons

56. The Forever War, by Joe Haldeman

58. The Chronicles Of Thomas Covenant, The Unbeliever, by Stephen R. Donaldson

61. The Mote In God’s Eye, by Larry Niven & Jerry Pournelle

62. The Sword Of Truth, by Terry Goodkind

63. The Road, by Cormac McCarthy

65. I Am Legend, by Richard Matheson

67. The Shannara Trilogy, by Terry Brooks

68. The Conan The Barbarian Series, by R.E. Howard

69. The Farseer Trilogy, by Robin Hobb

71. The Way Of Kings, by Brandon Sanderson

72. A Journey To The Center Of The Earth, by Jules Verne

73. The Legend Of Drizzt Series, by R.A. Salvatore

75. The Diamond Age, by Neil Stephenson

78. The Dispossessed, by Ursula K. LeGuin

79. Something Wicked This Way Comes, by Ray Bradbury

81. The Malazan Book Of The Fallen Series, by Steven Erikson

82. The Eyre Affair, by Jasper Fforde

84. The Crystal Cave, by Mary Stewart

88. The Thrawn Trilogy, by Timothy Zahn

89. The Outlander Series, by Diana Gabaldan

90. The Elric Saga, by Michael Moorcock

91. The Illustrated Man, by Ray Bradbury

93. A Fire Upon The Deep, by Vernor Vinge

94. The Caves Of Steel, by Isaac Asimov

99. The Xanth Series, by Piers Anthony

So I’ve read 11 – that is pretty paltry against what I would have thought before seeing the list. Admittedly, some of those are hefty series but still…there are some “classics” of the genre that I have managed to so far neglect – shame on me!

Guess I’d better get cracking on those that I own but haven’t read and using the perfect excuse for buying the rest! That’s a lot of instant new additions to the wish list! Not too shabby for a Friday evening…:)

Review: 'The Replacement' by Brenna Yovanoff