Why is coming home always so bitter-sweet?!  It was nice to get back to our house (and my own bed, oh how I always miss my own bed!) but we landed back to rain and endless grey, which was a bit of a downer.  We had an amazing time.  Routine, schmountine – I see no reason why I could not just stay in Italy forever, bumbling around and eating frankly delicious food, drinking amazing wine and actually seeing the sunshine occasionally.

Milan was predictably gorgeous and full of glamorous Italian women managing to cycle on the busy roads in skirts and stilettoes without sacrificing their dignity or their perfect hairdos.  We were there for three nights and although we both really enjoyed it, three nights was enough.  We’d covered pretty much all of the historical sites we’d wanted to see and headed out of the city to nosy at the San Siro football stadium (because I’m just that good a girlfriend, obviously) and drunk plenty of glasses of local wine and prosecco in the sunshine.  It was an excellent start to the holiday but as the temperature climbed, the heavy city air got a bit much and we were kind of glad to get on the train and head to Lake Garda.

Lake Garda was stunning.  Our hotel had bikes that we could borrow so we spent a few mornings just cycling around the lake and looking around little towns.  We’d planned to use Lake Garda as our downtime, though, so that was about the extent of our jaunting.  Actually, that’s not quite true.  We did take a bus to Verona on one day, which was fun.  We went to have a look at “Juliet’s balcony” but didn’t go into the house because even though I’m sure that it’s a lovely 13th century house, Shakespeare obviously made Juliet up and there was no way I was spending £10(ish) to look around the house of a family whose name happens to be quite similar to Capulet (dell Capello,,,),  It was a beautiful town though with an amazing Roman theatre and some truly beautiful views (after we trekked up a hefty amount of stairs!).  ANYway, Lake Garda.  Lots of fish eaten.  Lots of time reading.  Lots of fresh air.  Perfection. 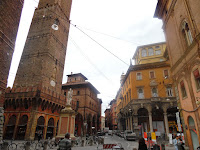 Bologna was…interesting!  Apparently communism is still pretty popular in the area and the town was a mixture of medieval architecture and anti-establishment graffiti! The town felt a bit dilapidated in a lot of ways but it was also packed full of quirky bars and adorable shops selling vintage dresses that I could have bought hundreds of and accessories that I am nowhere near cool enough to pull off. Oh, and the food! The home of the now somewhat spoiled bolognese, it’s a bit of a foodie hotspot. Colour me happy.

So the scenery was perfect, the food and the drinks were glorious and we got in plenty of much needed sunshine.  I know, what about the books?  I read…4 whole books and a bit of another.  More than I’d expected to read in the 9 days we were away.  After making my way oh-so-slowly through War and Peace, the pace felt blistering.  First up was The Day We Disappeared by Lucy Robinson, which was the perfect way to start my holiday.  I bought it after seeing Ellie Bookworm’s review and picked it out from my Kindle on a whim before we headed to the airport.  It was funny and so sweet and it made me cry on a train.  It was light without being insipid and I’ll definitely be keeping an eye out for other books by Lucy Robinson in the future.  I’d picked out The Fire Rose by Mercedes Lackey before I went and I was in the mood for some fantasy so that was up next.  I can almost hear Hanna‘s victory chant from here.  Unsurprisingly for a book that comes so highly recommended by Hanna, I loved it.  The focus on the elements in the magic system was great and I liked how there was plenty of background and detail without it being dull.  I think it helped that it was a Beauty and the Beast re-telling so the story itself was familiar, even though the characters and magic were new.  Another series I’ll be carrying on with.

I didn’t want to jump straight into another fantasy after that so I ducked off in a historical fiction direction with Wildthorn by Jane Eagland.  About a young woman who finds herself incarcerated in an asylum under a name she’s never heard and her struggle to escape.  The portrayal of the diagnosis and treatment of mental health issues in Victorian England were fascinating and the main character was great but the romantic tangents were comparatively weak and let the whole down.  And you can call me morbid but I decided to stick with the asylum theme with a ghost story that there’s no chance I’d be brave enough to read if it hadn’t been for the almost perpetual sunshine, Asylum by Madeleine Roux.  It was…ok.  The photographs of abandoned institutions and of “patients” throughout the story were haunting and definitely creepy but the story itself was a bit daft.  It was kind of like the Goosebumps books I loved as a kid – the plot is unbelievable and follows a few blundering teens as they encounter sinister supernatural goings on and launch “an investigation”.  A quick read but not a series that I’ll be picking back up again, I don’t think.

And that’s it!  I read some articles by David Mitchell in his book, Thinking About It Only Makes It Worse on the plane but now that I’m home, I’m back into Dragonfly in Amber and am addicted.

Tell me everything that happened while I was away! Hope you all had a wonderful couple of weeks and read something amazing.
Previous