It’s been a while since I have properly used our local library. I’ve read the articles in the press about the rafts of libraries that are being closed as appalled as everybody else that would call themselves a “reader” but still haven’t got off my bum to visit and prove that libraries are still relevant and valued. When I was young, I regularly raided the children’s shelves at the library in the village where I grew up and tormented my family by reading out endless amounts of undoubtedly hilarious jokes from the joke books that I had a penchant for at the time. When I was a little older, I borrowed endless seeming streams of Babysitter’s Club and Sweet Valley High books and, in braver moments, Goosebumps books. When I was a teenager, my friends and I devoured the Point Horror books and I started to branch out into grown-up books as I exhausted the admittedly limited Young Adult section. All without spending a penny. It breaks my heart that something like 10% of the UK’s public libraries are currently under the threat of closure and that websites like Voices for the Library have to exist. That reading has become such a low priority for the Government and for local authorities that cutting access to free material is seen as a sensible way of cutting outgoings.
BUT! This wasn’t really supposed to be a sad news story. I requested Allegiant back in November and got a random text a few weeks ago to say that it was ready for collection at the library in my village. As I tend to do these days (much to my shame), I dashed in on the way home from work one evening, paid the measly 90p that the library charges for tracking down any book I fancy and having it brought as physically close to my home as possible and dashed out again. I hadn’t been in the library for months before that time so when I had to return Allegiant yesterday, I decided to spend a bit longer in there to have a nosy around and dug out these delightful specimens: 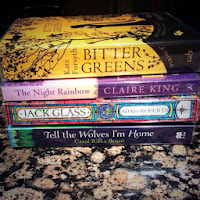 I actually have an ebook copy of Bitter Greens on my old ereader and borrowing it from the library seemed more sensible than buying a second copy on my Kindle. I loved The Wild Girl when I read it last year so I’m hoping this will be even half as good. I can’t remember where I saw The Night Rainbow but it’s set in Southern France and seems to be about a five year old getting to grips with the death of her father and her mother’s depression. Jack Glass was one of those library punts; an award-winning sci-fi about some kind of murderer in an intergalactic prison that I’m pretty intrigued by! It was only a matter of time before I succumbed to Laura’s praise of Tell the Wolves I’m Home and now I know that it was one of Katie’s favourite reads from last year too! Probably my next read. Maybe? I don’t know! They all look great!

The library catalogue generally really looked like it had been given an overhaul and there were a lot of slightly quirky books from newer publishers (like Angry Robot) that somebody has obviously put a lot of effort into acquiring and arranging. Gone were the dusty, ginormous print hardbacks of previous years and in their place were some genuinely appealing modern paperbacks.  They even had a stash of Penguin English Library editions of classics rather than the frankly grotty versions with teeny tiny text. I didn’t really mean to borrow anything and I ended up with an armful in about 5 minutes and it was exciting that I wouldn’t have to get them home and feel a twinge of guilt at having bought yet more things that I may or may not read within the next five years. I could have lived without my attempts at acknowledging that effort at a time when I was the only person in the library aside from the librarian being rebuffed with a rather brutal, “Is the machine broken?” but that hasn’t dampened my overall warm, fuzzy feelings. (Although really, I was trying to be nice, Librarian Lady, and to let you know that I appreciated you and the rudeness did sadden and annoy me…)
Back in 2011, the Council responsible for the village I live in closed 13 libraries. It was originally supposed to be 15 but two were saved at the last-minute. The library nearest to me was not under threat, thankfully, but that obviously doesn’t mean that it never will be. I’m not always going to be the biggest patron because I read a lot of eBooks, have so many books at home that I haven’t read that it is bordering on disgraceful and most of the events that they run are while I am out at work during the week. I am going to try to keep an eye out for things that I can contribute to, though. Even if it’s just by trying to help get the word out about anything they might be doing. National Libraries Day is coming up so I’ll probably do another Library Love ramble then. It’s a shame that we need a day to acknowledge and celebrate libraries but for the moment, I’m just happy that there are libraries still there to love.
Previous