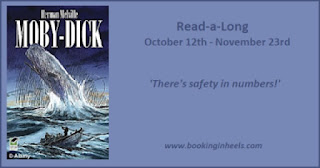 21 chapters down already! Thank goodness Melville decided to mix in some short, snappy chapters among some of the epic ones to keep things moving.
Thanks go to Hanna as always for her handy prompts! Let’s talk Moby Dick.
1) So, first impressions. What do we think of the novel?
I don’t want to speak too soon but it’s not torturous! I genuinely wasn’t excited about getting started and it’s a testament to how much I love Hanna that I did just that. Honestly, though, I’m actually quite enjoying it! Melville’s writing is actually quite witty and the tone is warm and chatty. Not anywhere near as dry and stuffy as I’d been expecting!
I wouldn’t say I love it all (the chapter-long sermon about Jonah made me want to cry) but on the whole, I’m feeling quite relieved and as though I’ll make it through the next few weeks.
2) What about Ishamel’s attitude to Queequeg? Is his tolerance ahead of its time or just a form of casual racism?
You know, I’ve gone backwards and forwards over this while I’ve been reading this week. Before the chapter where Queequeg is observing Ramadan, I was quite impressed by how Ishmael and Queequeg’s friendship was portrayed. Sure, Queequeg is referred to as a “savage” or a “cannibal” almost exclusively so it’s hardly the most enlightened but the fact that it’s a relationship of equals did strike me as being quite forward-thinking.
I’m not so sure now. The chapter where Ishmael displays such an unwillingness to engage with Queequeg about his beliefs and talks about quite belittlingly about how religions can have whatever silly traditions they like as long as they don’t harm anyone (believer included). The language during that chapter felt patronising and ignorant.
But then Ishmael defended Queequeg when he took him to sign up to go a-whaling so I just don’t know. That’s my conclusion: I don’t know, although I’m sort of leaning towards it being ahead of its time.
3) Do you think Ishmael should have heeded Elijah’s spooky warning?
How creepy is that guy?! Putting aside the fact that if he had heeded the warning. there’d be no story, I think yes. That said, is it a good policy to take life advice from crazy-seeming strangers in the street? Probably not. Still, there’s be alarm bells and if you’re heading off to sea with someone that you’re warned off, I’d maybe say think twice.
4) Captain Ahab! He’s almost with us. What do you expect from him?
Finally! This is going to be hard to explain but I’m expecting Ahab to meet the expectations I had for Ishmael.  Sort of a stereotypical wisened, foul-tempered seaman with one leg and a grudge. Maybe a bit eccentric, too. He’s had quite the build-up so I’m looking forward to meeting him.
I’ve said it before and I hope I’ll say it again but I’m pleasantly surprised so far. Long may this continue, read-alongers!
Previous

Ode to the Midori Traveller's Notebook