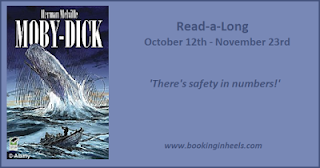 Wow.  What an ordeal THAT turned out to be!  The early days of highlighting endless quotes and revelling in Ishmael’s witty chatter seem a dim and distant memory.  Hanna and I are now even for the Hope: A Tragedy debacle.  I unwittingly inflicted exploding animals on her; she unknowingly inflicted graphic animal butchery on me.  We’re quits, right?
In case my gleeful post title didn’t give it away, this is the last post in our read-along – if you don’t know the ending of Moby Dick and you want to keep it that way, look away now.  Actually, before you do look away, please note that I in no way encourage you to read this book unless you have frankly borderline-unhealthy interest(s) in whale anatomy, how to skin and de-blubber a whale, rope and/or the colour white.  You have been warned.
Right.  On with the prompts!
1) Let’s start simply. Did you like this book?
No.  No, I did not.  I liked the first couple of weeks’ reading when the tone was light and essay-free, Ishmael really shined through as a character instead of just being a neutral narrator and the world was full of mystery.  It really started to fall apart for me I think maybe in the third week?  Whenever the monologues about whales started.
When they started, Ishmael’s personality sort of faded away and the story of Captain Ahab and Moby Dick became like debris drifting around in a sea of facts nobody ever wanted to know about whales.  I understand that when the book was published, the background was probably essential in engaging readers who couldn’t pick a whale out of a fish line up (apparently) and that’s fine but why, oh why has it endured as a ‘classic’ and WHY does it continue to be dangled in front of diligent readers’ noses as Worthy?  I hate to say it (and you can call me a philistine if you like) but this book is dull and no amount of people on GoodReads extolling the virtues of Melville’s charming prose will convince me otherwise.
2) Is the ending what you expected? Was it worth the wait?
No and no.  I’ll be honest, I thought that Ahab would get his whale.  I didn’t want him to because one intimate account of a successful whale harpooning was more than enough for me but I thought Moby Dick would come a cropper.  I thought Ahab would probably die in the attempt and that there would be some kind of poetic mutual dying of a hunter and his quarry.  I did NOT think that the ending would be not dissimilar to many I wrote as a child.  “And then they all died” is not a million miles away from, “And then they woke up and realised it had all been a dream”.
I felt cheated.  I felt like I’d endured endless hours of wading through a whale textbook only to be fobbed off with something entirely unfulfilling.  And don’t even get me started on the fact that there were 135 bloody chapters in the bloody book and only 3 of them actually featured Moby bloody Dick.
I remain glad that Moby Dick had the audacity to defend himself and lived to fight another day but I’d rather not have had to tolerate much tedium for a rushed ending.
3) Do you think this book is rife with symbolism and metaphor… or is it just about a whale?
I grumbled about this last week and I actually stand by what I said.  Again, ignorant or not, I just can’t believe that somebody would wrap up a fable about the fallibility of man or whatever it’s rumoured to be about in so much drivel about whaling.  What purpose would that serve?  I don’t doubt that there was some symbolism and if I hadn’t been distracted by just trying to stay awake, I would probably be able to tell you about it now.  Overall, though, I just don’t buy that this is fundamentally about anything other than a sodding whale.
4) Is it likely you’ll ever read this book again, or recommend it to anybody?
Good heavens, no.  I neither hate myself nor any other human beings enough to suggest that they pick this up.  Unless I know them to be a whale scholar.  Then I might.  But even then I’d have to say, “Melville thought that whales were fish” and that would probably put them off unless they were very specifically a scholar of Views on Whales in the 19th Century.
To sum up: no.
5) Did you end using the tactics you identified earlier or did you just slog through to the end?
I slogged.  I tried to remain focussed on the ‘just 10 more minutes and you’ve knocked off another chapter’ but it became so hard to pep talk myself.  This last week I was mostly just concerned about getting through each page.  Not even the near-death of Queequeg managed to engage me.  It was rough.
6) Sum up this book in six words.
A poor excuse for a classic.
And on that slightly miserable and grumbly note, I’m going to go and carry on reading The Great Hunt by Robert Jordan.  Because if there’s one thing my reading year clearly needs, it’s another 600+ page book.  At least I know that this one doesn’t include anything to do with whales.
Previous

Canongate Handpicked: Get On It