February has been an odd month.  It started out on a high when I got offered a new job that I really wanted and it’s ended on a bit of lull as I’ve had to then deal with the flip side of that good news and tackle leaving my current job.  It’s been busy and awkward and tiring.
So between one thing and another, I haven’t actually finished a book since 31 January.  Normally that would be causing me all kinds of discomfort but I’m surprisingly fine with it.  I think because what I’ve been reading has been so good.  I’ve read half of A God in Ruins by Kate Atkinson.  I adored Life After Life when I read it in January 2014 and this companion novel is shaping up to be another great read.  The writing in A God in Ruins has a dry tone to it that feels very British and has made me smile plenty.  I’ve been reading it intermittently while I’m read-alonging and I’m hoping to finish it over the next couple of weeks.
In the middle of February, I started The Crimson Petal and the White by Michel Faber for a read-along I’m hosting.  It’s not a quick read as such but the pages are flying all the same.  I could talk about the book all day but I’ll move swiftly given that this is my first non-Crimson Petal based post in a while.

I’ve also been reading the first volume of the Lumberjanes comic series (Beware the Kitten Holy) on the Comixology app on my phone.  I thought I’d ordered the first volume through my local library after enjoying Nimona so much in January but when I went to pick it up, it turns out that I’d ordered the second volume.  Rather than start acquiring too many volumes of comics straight away, I had a bit of a nose around for digital comic apps.  I plumped for Comixology because in a great stroke of coincidence it was running a sale on the Lumberjanes series (I picked up the first volume for £2.49) and it offers some first issues/trials of comic series for free.  As it turns out, the app itself is fantastic for reading comics on.  It uses a panel by panel display that really does seem to have been designed with comic readers in mind.  I love it and I’m definitely going to keep using it to read comic series that I might not want to own physically.  Just a word to the wise if this is the kind of thing that bothers you,though – it’s part of the Amazon group.
What else did I do?  Oh, I posted a review of The Ballroom by Anna Hope.  It was a stunning book and one that I’m sure will sit comfortably among my top reads for 2016.
I also gathered up this pile of beauties while I was collecting my pre-ordered Lumberjanes volume… 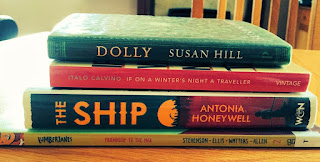 Even though none have ever lived up to The Woman in Black, I still can’t ever resist Susan Hill’s ghost stories.  Dolly looks and sounds wonderfully creepy (sinister dolls…bleugh…) and is only about 150 pages long so I’m looking forward to spending a gloomy evening with it soon.  If on A Winter’s Night a Traveller by Italo Calvino sounds wonderful, the edition in my library was a brand new Vintage edition and the librarian picked it up and was telling me how incredible a book it was so I’m excited to pick it up.  Just look at this blurb:

You go into a bookstore and buy If on a Winter’s Night a Traveller by Italo Calvino.  You like it.  But there’s a printer’s error in your copy.  You take it back to the shop and get a replacement.  But the replacement seems to be a totally different story.  You try to track down the original book you were reading but end up with a different narrative again.  This remarkable novel leads you through many different books including a detective adventure, a romance, a satire, an erotic story, a diary and a quest.  But the hero of them all is you, the reader.

Last up was The Ship by Antonia Honeywell, which was another brand new copy of a book that sounds fun.  I saw Ellie’s review and it sounds interesting so we’ll see.
And that was February! Hope you all had a super reading month!
Previous

The Crimson Petal and the White Read-along: Week 2 - Chapters 8 to 12