June was extraordinary. We got married, spent three weeks in Italy exploring, eating and drinking delicious wine and it was truly incredible. Since I’ve been back at work, I’ve been insanely busy but I’ve barely had time to think during the week. Hopefully things will be settling back down soon but for the time being, it’s looking likely that reading time is going to be a little sparse.  Still, let’s look back at what I did manage to read back when I was living the Italian dream!
What I’ve Been Reading
I finished a pretty whopping 7 books during June. It was a real treat to be able to spend so much time reading and relaxing and I’m very grateful that we got to start out married life in such a marvellous way! First up was Harry Potter and the Goblet of Fire by J. K. Rowling.  In pre-wedding prep time, I wanted to read something that I’d be able to follow even while I was busy and Harry Potter was the obvious, comforting solution. Goblet of Fire has always been my favourite and that hasn’t changed so far on a re-read. I cried at the end, perhaps even more likely given that I was somewhat hungover when I finished reading it. 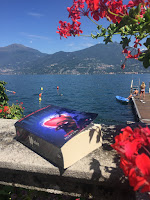 Next up, my Mum had impressed on me just how good the final two books in the Lunar Chronicles were so I went so far as to take out my paperbacks of Cress and Winter, both by Marissa Meyer.  I raced through Cress over a few afternoons in Sestri Levante and loved it just as much as I had the first two books in the four part series.  The last instalment I picked up when we got to Lake Como and I knew I’d have some solid reading stints by the lake.  It’s a series that I’ve really enjoyed; they’re so much fun to read and they’re completely addictive.  I’ll be reviewing the series as a whole soon (actually this time – I’ve written out a fledgling post and everything!).  In between those two, I broke out a NetGalley acquisition, One of Us is Lying by Karen McManus.  It’s a bit of a teen locked-room mystery.  Five students are locked in a room during detention and one is murdered.  The narrative flicks between the four remaining students as their secrets are revealed and they each try to clear their names.  It was surprisingly good!  I read a lot of Point Horror as a teenager and for some reason this reminded me of them.  I didn’t see the ending coming.  Or rather, I did a little bit before the Big Reveal but not so far ahead that I felt as though it was too obvious.  A solid summer read for sure.

After finishing the Lunar Chronicles, I fancied something a bit different and went for The Power by Naomi Alderman.  What a book! It won the Bailey’s Prize for Fiction so you don’t need me to endorse the quality but, honestly, it’s the type of book that really makes you think!  It makes some really interesting social points (even if it is a little heavy handed at times) and it’s such a gripping story.  The ending absolutely stuck with me and after I finished it, I was hit with a serious book hangover.  I tried to get over that by finally finishing The Book of Shadows by Deborah Harkness.  I’d read most of it before going away and had maybe 100 pages to finish on getting back.  It wasn’t my favourite series but it was ok. Good in places but just far too long. It felt a bit drawn out and laboured at times.
On a sunny afternoon, I decided to pick up a comic volume, I Hate Fairyland, Volume 1: Madly Ever After.  It’s a bubble-gum coloured, bright volume with a gruesome storyline. It’s basically about a girl who gets sent to Fairyland when she’s a small child but who, it turns out, is terrible at questing.  While most visitors explore the marshmallowy surroundings, find the key and go home within a day, this kid ends up spending 30 years trying to complete her mission.  She ages in her mind but not in her body. I can see that it wouldn’t be for everybody but the dry sense of humour is right up my straight and I enjoyed it enough to want to hunt down Volume 2 soon.
Books of the Month: Winter by Marissa Meyer; The Power by Naomi Alderman
Other Favourites!
TV Programme of the Month:  Easily Line of Duty. Everybody’s been talking about it for ages with the latest series being shown on the BBC.  It’s as good as everybody says! It’s about an anti-corruption department investigating dodgy police and we’re half way through the third series and it is so, so good. I’m partly glad we’ve not watched it before so that we can binge watch!
Film of the Month:  I literally haven’t watched a film all month…
Recipe of the Month:  Anything involving salami and cheese.  I ate cold cuts and cheese at least once

a day while we were away.  I kept expecting to get bored or tired of eating cold cuts and cheese but no.  I was living my best life.

Beauty Product of the Month: This pigment powder in Vanilla from MAC was part of my wedding make-up kit and it is AMAZING. It’s the easiest to use as a highlighter and it’s helped me maintain the look of someone who gets to spend plenty of time outside in the sunshine even though I no longer am!
Album of the Month: Since I’ve been back, I’ve listened to Sia’s album This Is Acting a lot to keep me pepped up!  Who doesn’t love Sia?!
Activity of the Month: I’ll save you another wedding ramble, bark out WEDDING, point over to this post and shuffle off on my way 🙂
And that was June!  I miss it already.  Let’s hope that July is half as good!