After the slightly odd month that was February, March has been outstanding.  I’ve read a lot more and my new job is less of a dim shining light on the horizon and more something that I can start preparing for actively.  We also went to New York for 5 days, which was an incredible trip!
New York 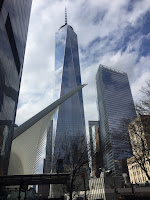 The trip has been planned for months – our best couple friends were going out to celebrate his 30th birthday.  He had no idea that we were joining him so after we’d checked into our hotel, we headed out and surprised him in bar, which was a heck of a lot of fun.  We spent Thursday on a river tour round Manhattan and wandering Central Park in the sun.  On Friday, we all headed to the 9/11 Memorial Museum.  It was all very moving (obviously) but the exhibit is extremely well done.  It was odd going to a museum and having children there learning about something that has happened during my lifetime and that I remember vividly.  I do recommend going though if you’re in New York.  After some lunch, Boyfriend and I headed for the Freedom Tower.  We’d done the Empire State Building and Rockefeller last time and so we wanted to visit this one on this trip.
And while we were at the top, HE PROPOSED.  I cried.  He cried.  I managed to get out a ‘yes’ at some point.  A guy who was a professional photographer offered to take some pictures for us, there was much excitement and I was completely overwhelmed.  I had no idea that he’d been planning it and he proposed with my grandmother’s engagement ring.  So romantic 🙂 It still seems kind of unreal to be honest but I’m so, SO excited!  I’ll waffle more as we start planning I don’t doubt but that’s all of the gushing I’ll do for the time being.
The Books
After not finishing any books in February, March has been much better.  Admittedly I’ve read a few volumes of some comics but I was kind of craving something light while I was finishing off The Crimson Petal and the White.

I’ve read the first two volumes of the Lumberjanes series over the course of February and I like it.  I don’t love it because it is clearly aimed at much younger readers.  It’s still entertaining to read and it’s funny but it’s just a little twee in places for my taste.  I’ll post some further thoughts soon!  Next up, I finally finished The Crimson Petal and the White and the ending was a disappointment.  I adored reading the book but I did not care for how the stories wrapped up.  I won’t direct you to my read-along pages because there are spoilers abound but I’ll hopefully write a spoiler-free review soon.
While I was away, I got a very small part of the way through what I’d hoped to read.  I did read The Lie Tree by Frances Hardinge and it was excellent.  It was a solid 4 star read for me and I can see why it’s so popular.  The writing is wonderfully atmospheric and surprisingly funny.  I didn’t expect it to be a mystery story but it was really pretty great and I’m looking forward to discussing it at book club next week.  I’ve also made a start on The Fireman by Joe Hill but I haven’t read enough to even really give an early verdict.
On the Blog
Among the read-along posts for The Crimson Petal and the White, I posted a review of Amy Poehler’s Yes Please and compared the audiobook with the paperback.  I also wrote about the stunning Through the Woods by Emily Carroll.  I’m not sure how much I’ll get written this month but I’m really pleased with how March has gone!
So March has been stellar and April is shaping up superbly too 🙂  I hope you’ve had a great month and read some great novels!
Previous

The Crimson Petal and the White Read-along: Week 6 - Chapter 30 to The End!