I feel as though October was a really good month for reading.  I’ve rolled into November really excited about the books that I’m reading and about the books that I have on ‘Read Sooner Rather Than Later’ pile, which has made me more excited about chatting about books, both on here and on Twitter. I love that with the arrival of Autumn, it’s much easier to “excuse” time under a blanket with a good book!  Over the course of the month, I read 8 books, which for me is pretty damn good!  It was boosted by the Readathon and the fact that I had a long haul flight and plenty of time sat around in airports for the first couple of days of the month.

Empire of Storms by Sarah J. Maas (4*) – I love this series.  I’ve just realised that I actually posted this in my last wrap-up, which is stupid because I definitely finished it on the way home, which was in October…ANYway, the fact that I love this series remains true.  It’s the only series that I’m currently reading where I specifically pre-order the next instalment so I can get to it as soon as possible.  This year, I saved it for a couple of weeks so that I could really get into it while I was travelling on holiday and it was absolutely the right decision.  I loved getting to spend time with these characters again, even if there were elements that I wasn’t 100% sure about.  I can’t wait to see how the series ends next year (book 6 is the end, right?).  Find my spoiler free review here.

Harry Potter and the Philosopher’s Stone by J. K. Rowling (5*) – another one that ridiculously made it into last month’s wrap-up…oops!  Still, it was great and I’m going to get to Chamber of Secrets soon.

Preludes and Nocturnes by Neil Gaiman (2*) – the first volume of the Sandman comic series.  I was not a fan.  When I finished the last issue, I was hugely annoyed.  Some miscreants try to capture Death and inadvertently capture sibling Dream instead.  Great idea.  I was totally sold.  The execution was…haphazard.  The issues that focused on Dream and his explorations of the world of dreams and his interactions with Death I really enjoyed.  There were a couple of issues, though, that were SUPER DARK.  One was particularly terrible and I very nearly didn’t get past it (some bad guy holed up in a diner making people cut each other up and…I don’t know, I skimmed a lot of it because it was gross).  I read an interview with Gaiman in the back of my edition, though, where he picked out those I didn’t like and highlighted them as those that he felt were weaker so I’m persuaded enough to pick up the second volume in the hope that it focuses more on what worked and less on what I, to put it bluntly, hated.  I don’t think I’ll talk about this one again because thinking about it does not make me happy.  Tell me if you’ve read other volumes and think I need to just give it another go before I psyche myself out.

A Tale for the Time Being by Ruth Ozeki (5*) – I adored this book.  It was just the right book to pick up when I was feeling sad about leaving Japan and it’s one of the best books I’ve read this year.  I’m trying to write a review to articulate how much I loved it and it’s proving tricky.

Bodies of Water by V. H. Leslie (4*) – a real little beauty of a book.  A small but nigh on perfectly formed gothic ghost story about a woman who moves into a flat built in what was a Victorian Water Treatment facility.  Another one I’ll review soon. 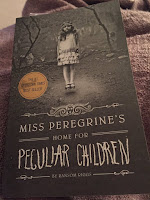 Miss Peregrine’s Home for Peculiar Children by Ransom Riggs (4*) – I read this during the Readathon a couple of weekends ago and it was the perfect choice for the event.  Pictures to keep my eyes from going square from all the words and a story that was just the right amount of charmingly weird.  I’m glad I already have Hollow City to get to soon!

An Age of License by Lucy Knisley (3*) – Knisley’s graphic novels have such a warm feeling to them. I love the way she writes and draws about her travels and this one had a really nice, introspective feel to it.  It was shorter than I was expecting but I liked it all the same.  A nice way to round off the readathon.

Dust and Shadow by Lyndsay Faye (4*) – oh, this book.  This book.  I loved Jane Steele by the same author and after this, I’ll absolutely be buying up everything she’s written.  This one was Sherlock Holmes and Dr Watson investigating the crimes of Jack the Ripper and it was just fantastic.  Faye got the tone of the Sherlock Holmes down perfectly, it was gloomy and atmospheric and so tense.  Another one I’ll just have to review soon!

I’ve been a bit more active on the blog this month, mainly because I’ve been really driven to talk about what I’m reading.  I really enjoyed the Dewey’s 24 Hour Readathon this year and I’m really hoping I’ll be able to take part next April. I posted a series of mini reviews of some of my (relatively) recent library picks and wrote a full review of a book I really enjoyed over the summer but never got round to writing about, The Joyce Girl by Annabel Abbs.

It’s actually been quite a quiet month generally.  After we got home, we were jetlagged and had some quiet time and then I had a wisdom tooth and some of my jaw bone removed, which was a bit more difficult than expected and took me longer to recover than I’d hoped.  November looks busier because we’re celebrating Boyfriend’s birthday but the nights are drawing in so I still foresee plenty of reading!

Oh, and I finally got round to treating myself to a Prudence and the Crow subscription.   It’s £15 a month and promises to include a vintage book chosen based on the favourites/likes/dislikes/hates that I put into my opening questionnaire together with a few other goodies.  It’s a good price point, the website is just lovely and because it’s vintage books, I’m not too worried about cross-over with books I already own.  I’ll post about my first box around about the middle of the month but it looks fantastic and I’m really excited 🙂

How was October for you all? Anything you’re particularly excited for in November? Tell me everything!
Previous