The eagle-eyed among you may have noticed that my Books Read 2012 list over there to the right is increasing at a much higher rate than my reviews are appearing.  That’s in part owing to the fact that getting back into blogging has taken longer than I expected after our accident but mostly to the fact that work is all kinds of busy at the moment.  SO to catch myself up, I’ll be reviewing the books that I’ve read over the past couple of months that I’ve enjoyed but that haven’t completely rocked my world are going to be the subject of little mini-reviews until I get myself back on an even keel. I’m going to at least try to bunch them into genre lumps because that appeals to my overly-organised side!  First up…


Virals by Kathy Reichs (Find it on GoodReads here)

Genetic mutations, eyes that glow in the dark and a bunch of teenagers that run around in the wilderness at night in an attempt to foil a murderer.  I found this in the local library and remembered Ellie’s review at Musings of a Bookshop Girl.  This year has seen me read much more crime fiction than probably any other year ever so this book slotted in nicely. I liked it – it’s a rip-roaring, action-packed way to spend a couple of hours with healthy doses of deserted island atmosphere and grand conspiracy theories to keep things interesting.
That said, it’s very much a YA book.  Tory Brennan is a feisty narrator and has a voice that I’m sure will appeal to other teenagers.  It took me a while to get used to but it does lend a youhful tone to the book that helps it carry off some of the more…erratic actions of its teen cast and I can’t imagine the story working any other way.  Likewise my grumpiness at some of the characters’ decisions – despite the fact that there would obviously be no story but for their independence, sometimes I just wanted to grab the kids’ ears, drag them to their liberal parents and force them to explain their problems and ideas so that they would stop being rash and getting themselves into pickle after pickle, while also making sure they understood the irony of their trying to fight crime by committing their own.  “Be tolerant” is all I can say, folks, it is worth it.
In short, I’m pretty sure that this is what you would get if you crossed the Famous Five with Spiderman; over-enthusiastic youths + animal-related genetic mutations = Virals.
Rating: 3 stars out of 5 for being fun, frantic and delightfully random.
The Keep by Jennifer Egans (Find it on GoodReads here) 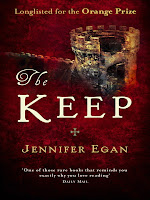 Another library selection and one that’s been on my wishlist for years.  Billed as a ghost story, this is actually more of a twisting story-within-a-story-within-a-story, with each layer eventually colliding in a conclusion that had me staring at the pages in a rather gormless fashion.  Danny is spending some time with his cousin at an abandoned keep in Eastern Europe while he renovates it and creates a luxury hotel amidst some eery goings-on (hence my plonking this in the ‘Mystery Edition’).  The ‘keep story’ is, however, at the whim of its writer, a prison inmate taking a writing class, who is reading it aloud to his fellow inmates and interrupts himself without warning to respond to hecklers or provide some background notes.  There’s also a third story mixed in but I won’t spoil the ending by revealing what that is.
Ultimately, this is a very clever look at the nature of stories, how they can take on something of their author and how useful literature can be as a source of escapism, with a neat sideline in the modern world’s reliance on technology and social media.  It’s also a genuinely gripping and wonderfully surreal story itself with a potential haunting, damaged  (potentially psychotic) but intriguing characters and a gnarled plot that is extremely difficult to fully  keep a handle on.
Even though I loved it, I will smack a health warning on this reviewlette:  This will most certainly not be for everyone.  Each storyteller is distinctive and compelling in their own way but most are far from likeable.  If you’re the type that has to like or sympathise with a narrator/protagonist, you and The Keep are probably not going to be the best of friends.  There’s also very little in the way of punctuation, which I assume is to keep it true to the ‘prison inmate turned writer’ concept. PLUS, there’s some bad language so if you get twitchy at the F-bomb being dropped, you’re going to be unhappy.
Rating:  4 stars out of 5 for being utterly unique in style and content.
The Blackstone Key by Rose Melikan (Find it on GoodReads here)

Yet another library find but one that I’d never heard of and grabbed on the off-chance that it would be a hidden gem.  A mystery of the historical variety, this was a slow-moving one that I fell out of love with somewhere along the way.
Mary Finch is wending her way (oh-so-bravely, apparently) to her Uncle’s estate in order to build some familial bridges.  She definitely isn’t going to visit her rich, elderly relative (of whom she is the only potential heir) because she happens to come from the poor side of the family and is looking to improve her lot.  Sadly, in attempting to convey that (dubious) message, Mary comes across as a little pious and a lot naive.
In the end, the book was let down by a weak mystery.  It sort of revolved around a man dying in the side of the road holding Mary’s uncle’s pocket watch, a band of smugglers and some spies.  There’s some nifty smuggler code-cracking and some twists and turns that I didn’t wholly see coming but overall I couldn’t help but feel as though the story suffered from being stretched over too many pages.  There was a wishy-washy feel to most of the plotlines that was as irritating as over-diluted squash – it could have been delicious but instead I was left trying to find flavour dampened by too much water.  Rather like an over-stretched juice-related metaphor, you might say!  The writing was also quite repetitive.  If I’d been told one more time about how smart and cute and genteel Mary was, I would have screamed.  As it was, I only got to the stage of sighing dramatically and rolling my eyes.
Also, the ending was twee and predictable.  Enough said.
Rating:  2.5 out of 5 stars for being an acceptable historical fiction but being tainted by a touch of tedium.
Previous

It's Monday! What Are You Reading? #9