As you must know by now, this readalong is (was?) hosted at The Literary Odyssey here – even if you don’t care about Rebecca, check out Allie’s blog – there are a ton of readalongs and a lot of reviews of classics to keep you entertained!
Over this past fortnight, participants were finishing the end of the book. Although, from what I’ve seen so far – nobody managed to make it last that long! 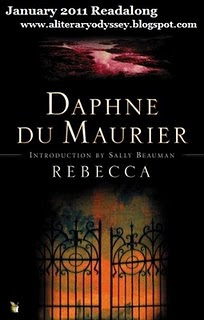 Where did we leave off? Our somewhat lacklustre narrator was whining her way around Manderley; Mrs Danvers was creeping everybody out in the way that only a shrine-maintaining housekeeper can; Maxim was sulking a lot and all was less than rosy in the newly-weds’ life.
I’ve re-read my first post with the benefit of hindsight (and some helpful points from the Afterword in my version) and its made me realise how good it is to have a note of your thoughts of the first half of a book in isolation. Usually, I’ll sweep on through a book, get caught up in the excitement and my love (or lack thereof) for the story as a whole dampens those first impressions. So that’s good lesson from the readalong number 1!
The Second Half
****Spoilers from here onwards – if you haven’t read Rebecca yet but are planning on, be warned!!****
At the end of my first post, I said that I wanted the narrator to become more assertive – so did she? Surprisingly, I found myself completely charmed by her by the end of the book! And that was something I completely wasn’t expecting. She wasn’t exactly forthright and occasionally she had a fainting spell, which strikes me as a mostly nineteenth/early-twentieth century phenomenon, but I was in awe of her stoicism. I’m quite an emotional person in some ways so I’m not the best judge here but I’m fairly convinced that if my new husband admitted to me that he had shot his former wife and drowned her body in her boat, I’d be a tad perturbed…to put it lightly…I admired her quiet strength more than I would have admired a big showdown with Mrs Danvers.
I also changed my opinion of Firth. Yes, he was still creepy (to me) but only because he kept popping up everywhere unannounced! Having thought on that, perhaps that’s because I don’t have house staff and the idea of somebody other than me and the boyfriend skulking around my house unheard and unseen unnerves me….
On to the story: The action unfurled very quickly after I passed the agreed half way marker. I still found Manderley itself to be fantastically and unswervingly present as an entity in the book – particularly when just a picture on its walls wreaks such havoc for our narrator. From what I have read about the book and Du Maurier since, this was based on the house in which she lived for many years and I’m so totally visiting Cornwall this summer to see if I can catch a glimpse!
A lot of the second half of the book reminded me of a play – all of crucial events take place in one room, with characters entering and exiting and playing their parts beautifully. From the moment Maxim confesses to the narrator, they seem to become part of Manderley – their fates are all bound up in the events playing out in the library and I thought the final paragraph reflected the destruction wreaked on all the characters with brilliant poignancy.

And one last thing, I found the social aspects very interesting – the way the ‘Establishment’ works to protect Maxim, as a wealthy and upstanding gentleman of class, and ultimately sees him escaping punishment (in the public sense) for his actions, is creepy in its historical accuracy. And, even though I obviously didn’t like him, I found myself feeling extremely sorry for Favell. He seems to genuinely have loved Rebecca (in his own warped way…) and is desperately reaching for some form of justice only to be thwarted by the protection the upper class law enforcers afforded their “equals”. The narrator’s perception that they are knowingly being protected is unnerving – I found it all to be very throught-provoking, and I love that in a book!
Some minor downers: The part of the story where the narrator is preparing for the ball and choosing her outfit was too predictable, at least I found it to be. Had my arch rival “kindly” suggested an outfit choice to me prior to the biggest event in my life after my wedding, I’d like to think I’d have the common sense to think, “Hang on a second, maybe all isn’t quite as dandy as it seems…?”, rather than flop straight on the idea and wind up realising that, yes, Mrs Danvers is a bit of a crafty one…I’ve tried to ponder this one and come to terms with it – is it intentional and meant to demonstrate our narrators trusting nature and general naivety? Maybe. Was it a slack plot device on the part of the writer? I’d like to think not.
Overall: I really enjoyed this book – it does have a kind of slow beginning but just after the half way point, everything speeds up immensely. From the moment the boat was found, I was hooked. I read this at every available minute of my day and was sad when it was over. Good signs indeed.
One final thing: this book was on my ‘TBR Pile Challenge’ list – what a way to start! So that’s one down, eleven to go!
Previous

So that was January...