In June 2010, I was browsing the internet looking for my next read.  I was surprised to stumble upon a whole swathe of people that were writing about what they were reading, setting challenges for each other and getting as giddy over new acquisitions as I did.  Since I was working in a job that, while was in the sector I ultimately wanted to work in, wasn’t particularly taxing mentally, I became intrigued by the idea of trying it out for myself.  Much as though regularly filling in job applications was a riot, I wanted something that I could be creative and have fun with.  In July 2010, Lit Addicted Brit was born. 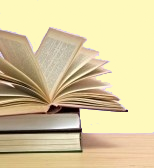 Nearly two years later, I have the job that I’ve been working for pretty much as long as I remember.  And yet I still maintain a book blog.  Maybe not as regularly as I did when I was funnelling all of my creative energy into it but I still do it and I still love it.
So why am I getting all warm and fuzzy and telling you this?  Don’t worry, it isn’t because I’m going soft.  It’s because I think that sometimes it’s nice to have a reminder of why you started doing something in the first place, why it’s worth doing or why you love it.

Community
I’ve lost count of the amount of times I have seen someone write in a post something to the effect of “my ‘real life’ [friends/acquaintances] don’t get how I can be so into books and reading but my blogging friends accept me and my opinions without a second thought”.  That’s part of the reason why I started blogging myself.  I can engage with other readers who surround themselves with books like I do and who are equally convinced that there isn’t enough time in the world to read all the great books that are out there.
I have “met” other book bloggers whose reading habits are remarkably similar to my own and whose opinions I not only listen to but actively seek out.  I can’t see how else I would have come across such people and I refuse to see anything bad in a forum that encourages that.
Finding new genres

Before I started blogging, I would have told you that I didn’t really like crime or mystery novels, that I wasn’t wholly convinced by science fiction and that I was reasonably “well-read”.  I would tell you none of those things now and that is because of the energy that other bloggers put into persuading me and other readers that they’re missing out.  I am sometimes amazed by how much blogging has changed my reading habits
You can do your own thing
When I was 17 and about to sit my final English A-Level exams, my tutor told me that I wasn’t as good as another girl in my class and that, if I wanted to beat her, I would have to work harder.  She misunderstood me entirely: I have never cared what anyone else is doing.  I rarely look sideways and compare myself to my peers because I can’t see how anything good can come from it.  I love that when it comes to my blog, it looks how I want it to look and stands for what I want it to stand for.  Every single blog I come across says something about the person that runs it.

For me, it doesn’t matter how many followers I do or don’t have, how many followers someone else has or about blogger/author/publisher relationships.  It’s about sharing books I love with other people who are doing the same or about getting post-bad-read-blues out of my system with a mini rant 🙂

Sharing some love
There are some wonderful bloggers out there and I’m going to round off an uncharacteristically gushy post by pointing you in the direction of some bloggers whose opinions I respect, whose posts I pretty much always read (even if I don’t always comment on them :-s) and whose recommendations I genuinely listen to:
Hanna at Booking in Heels
Ellie at Musings of a Bookshop Girl
Ellie at Curiosity Killed the Bookworm
CurlyGeek04 at The Book Stop
Feel free to share some love for book blogging, book bloggers or anything else on this wet and windy Sunday!
Previous

Review: 'Before I Go To Sleep' by S.J.Watson

Some Thoughts on 'The Hunger Games' by Suzanne Collins