When we moved house just over a year ago, I dutifully (if a little resentfully) tucked all of my books up into boxes and loaded them up into the van.  We’re slowly working our way around the rooms of the new house and decorating them one by one but it’s taking us some time to get to the smallest of the bedrooms, which will ultimately be the study/reading room.  It’s up soon (next but one) but we’re not quite there yet. 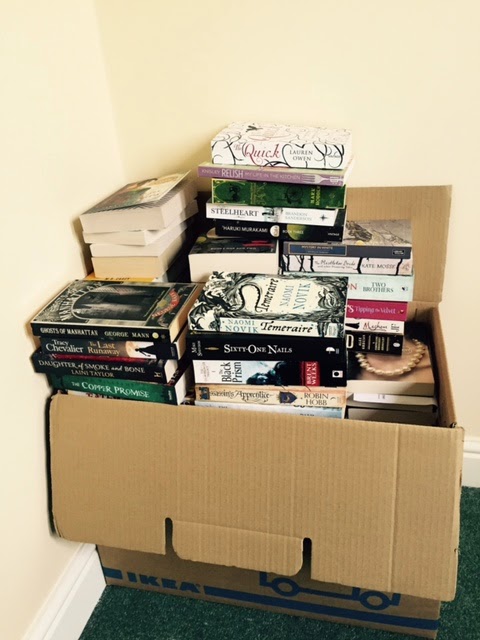 Anyway, we’ve started on the next spare room this weekend, which has meant that we had to move the furniture out and into the Future Study/Reading Room.  Which meant making room.  Much though it killed me a little bit, the read books moved up into the attic (TEMPORARILY).  The unread books were the subject of much debate.  I was adamant that they would stay accessible, Boyfriend was adamant that they had to go out of the way while we finish up the decorating.  The unfortunate thing about this whole exercise was that the Box of Shame was the subject of the discussion.  The entire very large box shown on the right is unread books.  Not all of the unread books that I own (shamefully) but enough unread books that if I read nothing but the books in this box, I’m pretty sure I’d still have reading material spare in a couple of years,
There are books in that box that I’d forgotten I owned.  Books that I’ve owned for years.  Although it’s exciting in many ways, it really does make me feel as though I need to stop buying new books for just a little while and start looking to the Box of Shame, so called because I *may* have been using it as a means of bringing in books and mixing them up so that people don’t notice.  Maybe.  Ahem…
Boyfriend and I have struck a deal to solve the “problem” (and he is unmoveable on such things so will be helping me keep on top of it): I can have ten books out of the box at any one time.  When I’ve read those ten books, they will be returned to the attic and I can pick ten more.  Kind of like a more inconveniently enforced seasonal TBR pile.  Obviously, picking ten was ridiculously difficult, especially with someone that doesn’t appreciate books looming over me and telling me to “just pick”.  But “just pick” I did and these are my first ten: 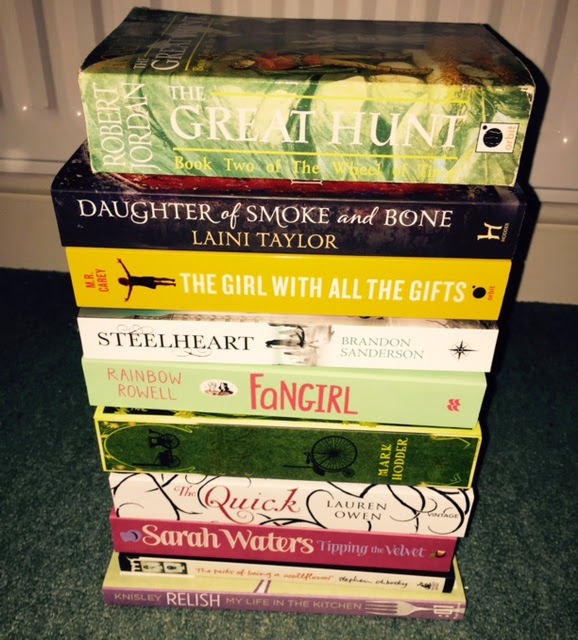 The Great Hunt (Wheel of Time series: Book 2) by Robert Jordan
Daughter of Smoke and Bone by Laini Taylor
The Girl with all the Gifts by M. R. Carey
Steelheart (The Reckoners series: Book 1) by Brandon Sanderson
Fangirl by Rainbow Rowell
The Strange Affair of Spring-Heeled Jack by Mark Hodder
The Quick by Lauren Owen
Tipping the Velvet by Sarah Waters
The Perks of Being a Wallflower by Stephen Chbosky
Relish: My Life in the Kitchen by Lucy Knisley
I’ve gone for a mixture of recent arrivals and older books, a bunch of different genres and a blend of YA and adult so that hopefully there will always be something that I fancy.  The Great Hunt obviously isn’t new or indeed unread (and its being included in the ten was a bone of contention that I have moved past) but I’m saving it so that I have something to balance out War and Peace if a miracle happens and I get ahead of the read-along schedule (ha) or if I need a brief respite from all of the Russian names!
I’ll see you for the next ten soon, hopefully!  I know that I’m not the only one trying to get on top of the number of unread books that I own – if we stick together, I’m pretty sure we can do this!!  Come on, us!  🙂
Previous

Review: 'The Girl on the Train' by Paula Hawkins