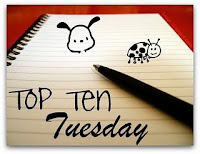 I *love* this week’s topic.  I’ve spent pretty much all of my time as a book blogger getting caught up in what books everybody’s reading RIGHT NOW and posting about the books I’ve just read and cooing over the books that I’ve bought and am excited about reading that I’ve completely neglected the terrific books that I read before Lit Addicted Brit was born.
Want to reminisce along with me?  Head over to The Broke and the Bookish…
And I’m not even close to being organised or ruthless enough to actually rank these so these are in no particular order whatsoever!

1)  The Pillars of the Earth by Ken Follett
When I started this tome at the beginning of January 2010, I admit that I was intimidated. Over 1,000 pages about the building of a cathedral in the twelfth century? I don’t know what I expected when I bought it but I never expected it to be so full of emotion.  One of my favourite books, without a doubt.
If you’re a historical fiction fan, I can’t imagine you finding better.  There’s tragedy and heartache against a soaring triumph of architecture.  I actually do own World Without End (the next in the series) but these books are killer to carry around so I’m saving it for a time when I can race through it within my own home.
2)  The Eye of the World by Robert Jordan

When I was in high school, I was a student librarian.  I know, not exactly the coolest but some of the best half-hours I spent at that school were in that library.  What can I say?  All girls comprehensives can be pretty bitchy and libraries are never bitchy.  So anyway, while in that library, I met a girl who was one of the only people that read as much as I do.  After some time spent sizing each other, she put herself out on a limb and leant me this book.
It isn’t flawless and I know that but it was my first experience with epic fantasy and I will always love it.  Whenever I got the chance to race through the Sci-Fi/Fantasy section of our local Waterstones (which I was too shy to dawdle in), I would grab the next in this series.  If you’re even remotely an epic fantasy fan, please read this series.  Just don’t tell me if you hate it, because I am way too fond of it to hear your criticisms!
3)  Harry Potter and the Goblet of Fire by J.K. Rowling
I know, big surprise!  I’m pretty sure that this one doesn’t need an explanation…I could have included any one of the Harry Potter books really but this one is the one that I always remember as my favourite so it wins the spot.

4)  Across the Nightingale Floor by Lian Hearn
I have absolutely no idea when or where or why I picked this book up.  No idea at all.  What I *do* know, however, is that this whole series is incredible.  Set in Feudal Japan against breathtakingly exotic scenery with a dash of fantasy, it is so completely unique and utterly completely.  I read this, the following two in the trilogy, the follow-up and the prequel in quick succession and I would love to do it all over again for the first time.
If you haven’t read these and fancy something a little bit different, The Tales of the Otori series should be at the top of your list.

5)  The High Lord by Trudi Canavan
The final instalment of The Black Magician trilogy and, for once, the last was my favourite.  Usually I love meeting all of the new characters and getting caught up in their stories but with this series, it was the resolution of those stories that became my hands down favourite.  Maybe because there are plenty of hints at action still to come in the Traitor Spy trilogy.  Or *maybe* because I had a mega literary crush on a character whose name I don’t want to give away so that I don’t get spoiler-y.
Love yourself a strong heroine?  Go and find this series – it’s just fantastic.  A few grown-up moments mean this is probably more sensible for a recommendation at the top end of the YA spectrum.
6)  Captain Corelli’s Mandolin by Louis de Bernieres

I remember finding a lovely copy of this in a charity shop (although I can’t remember where that charity shop was…) and then I remember leaving it on my shelf for a criminally long time.
“Extravagant, inventive, emotionally sweeping, Captain Corelli’s Mandolin is the story of a timeless place that one day wakes up to find itself in the jaws of history”  I couldn’t put it better myself.  Set on the beautiful Greek island of Cephallonia while under occupation by part of an Italian regiment, it is just awe-inspiringly terrific and I fell in love with the setting as much as the characters.  And the ending!  The ending is one of the best (and perhaps least expected) in fiction.  I haven’t ever seen the film adaptation but I’m led to believe that it is massively inferior – read it instead.  Right now.
7)  The Kite Runner by Khaled Hosseini

I read this back when I was at university and was completely floored by how incredible it was.  It is a source of much consternation that I didn’t read more while I didn’t have to work for a living but I suppose spending my days reading musty law books probably made reading in the evenings a little less appealing.
Regardless, this story of friendship, guilt and atonement is harrowing and so hard to just walk away from.  Set part in Kabul, Afghanistan and part in America, the blend of cultures and language appears effortless and is so wonderful.  A Thousand Splendid Suns would also be on this list but I read it a couple of weeks after I started the blog so close but no cigar…Hosseini’s writing is incredibly powerful and you should do yourself a favour and read one of his books.  There’s a new one coming out soon too so you have no excuse!

8)  The Curious Incident of the Dog in the Night-Time by Mark Haddon
Not the most sophisticated on the list, I’ll grant you but still a book I loved.  And then leant to my entire family for them to love.  I know that it’s been criticised heavily in the media for flaws in how it portrays a child with Asperger’s syndrome.  It might not be accurate and it might never be quoted in a science journal but it is a charming, funny and touching story about a boy that it is impossible not to root for.
Looking for something short and snappy with a narrator that you’ll love unreservedly?  Look no further!

9)  The Shadow of the Wind by Carlos Ruiz Zafon
There’s an antiquarian book dealer of a main character, a mysterious book, Barcelona and a Cemetery of Forgotten Books – what more could you want?!  Nothing, book-loving friends.  You could want nothing more!
Seriously, though, I really do love Ruiz Zafon’s writing in a way that is impossible to describe in a couple of sentences.  The Angel’s Game is a pretty strange follow-up but The Shadow of the Wind is pretty much the best mystery ever.
10)  The War of the Flowers by Tad Williams

Ok, so a quick scan of Goodreads has awakened me to the fact that this isn’t exactly a popular book.  But I loved it so it’s staying on the list.  It’s a standalone fantasy novel that boasts a hefty page count but I tore through it.  Either my mum read it and loved it and then leant it to me or it was the other way around…I can’t remember (which seems to be a common theme for this post!).  ANYway, I do know that I leant it to a friend that I used to work with and she read it and loved it too, so I’m calling it a hit.
About a man that stumbles into the eerie world of Faerie and finds himself at the centre of a war, it’s a really kooky story that remains my favourite book featuring any variation of fairies.  Think warring nobles and fast-paced action but with a sprinkle of fairy dust.  Want to read an urban fantasy but don’t want to get embroiled in another series?  The War of the Flowers is a winner.
So there they are! The top ten books I read before I started blogging.  If nothing else, highlighting these has shown me how little I remember about the way books come into my life!  It does show, though, that I need to spend a little more time remembering the treasures I discovered before I carved out this teeny tiny space on the internet.  Tell me all about your pre-blog favourites now, please 🙂
Previous

Literary Fiction Review: 'The Song of Achilles' by Madeline Miller