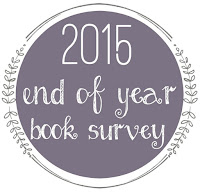 Ah, end of year survey time.  It’s been a funny old reading year.  On the numbers front, I’ve read fewer books this year than I have in past years.  Achievement wise, however, I’ve toppled two pretty intimidating (and lengthy) classics and I’ve started a re-read of a favourite fantasy series that also includes some pretty chunky instalments.  All is well.
Thanks for this survey and the adorable graphics to Jamie at The Perpetual Page Turner.  Not only is this survey about all my hangover-addled brain can cope with writing at the moment but it gives me chance to talk about some of the books that I didn’t manage to talk about while the blog’s been quiet.  On with the questions.  Links throughout are to my reviews.

1. Best Book You Read In 2015?
I read some excellent books in 2015.  According to GoodReads, my average book rating for the year is a pretty solid 3.7.  I gave 6 books a lofty five stars:
The Eye of the World and The Great Hunt by Robert Jordan
The Final Empire by Brandon Sanderson
Into the Wild by Jon Krakauer
Ready Player One by Ernest Cline
The Ballroom by Anna Hope
Of those, I think I’d say that my favourite was Ready Player One by Ernest Cline.  The most fun I’ve had in book form for years.
2. Book You Were Excited About & Thought You Were Going To Love More But Didn’t?
The Abhorsen trilogy by Garth Nix.  I’d been hearing about the series for years, with seemingly endless numbers of fantasy readers singing its praises and citing it as a favourite in the genre.  I was completely underwhelmed.  Some of the ideas were good but the second and third books were both far, far too long and felt rambly, too many characters were awfully whiny and I found finishing a struggle.  I was so excited to see them appear on my library’s eBook site and they just weren’t what I was hoping for.
3. Most surprising (in a good way or bad way) book you read?
War and Peace by Leo Tolstoy.  The 1,000 page plus Russian classic is an intimidating beast that I doubt I’d have picked up if it hadn’t been for Hanna‘s read-along over the summer.  What was surprising was how accessible it actually was.  I’m not saying I breezed through the pages and that it was all sunshine and balls but it was far more engaging than I’d ever dared hope.  I’m really looking forward to the BBC adaptation starting later this month.

4. Book You “Pushed” The Most People To Read (And They Did)?

I don’t know if anybody’s actually read the books that I’ve been trying to force on them but I’ve been rambling about The Wheel of Time all year.  I ran a giveaway and also sent Hanna a copy because I’m that pushy when it comes to this series.  I have the third book ready and waiting and I’m excited to continue on with my re-read this year.
5. Best series you started in 2015? Best Sequel of 2015? Best Series Ender of 2015?
Best series started:  Easily the Mistborn trilogy by Brandon Sanderson.  The first book is outstanding and I already have the next book ready and waiting on my Kindle.  This is one series that really is every bit as good as everybody says.
Best sequel:  If we’re talking next instalment generally, Queen of Shadows by Sarah J. Maas because that series is incredible.  If we’re strictly talking ‘second book’ (which is kind of what comes into my head with the word ‘sequel’. it’d be The Great Hunt by Robert Jordan.
Best series ender:  So it turns out that I only finished one series this year: the Blood of Eden series by Julie Kagawa.  By default, that makes me favourite series ender The Forever Song.
6. Favorite new author you discovered in 2015?
There are a few authors that I’m glad I found this year but I think topping the list would be Jon Krakauer.  I read very little non-fiction but I found Into the Wild to be such compelling listening and I will definitely be hunting down other books of his for 2016.

7. Best book from a genre you don’t typically read/was out of your comfort zone?
The Mistletoe Bride and other Haunting Tales by Kate Mosse.  It’s not necessarily out of my comfort zone but I barely ever read short story collections and this one was stellar.
8. Most action-packed/thrilling/unputdownable book of the year?
Ready Player One by Ernest Cline.  I absolutely flew through that novel and loved every single sentence.
9. Book You Read In 2015 That You Are Most Likely To Re-Read Next Year?
As always, none.  I’m re-reading the Wheel of Time series but other than that, I won’t be re-reading anything next year.
10. Favorite cover of a book you read in 2015?

11. Most memorable character of 2015?
Melanie from The Girl with All the Gifts by M. R. Carey.  It’s really hard to describe why without spoiling the book so this is a little bit of a lame answer but it’s the only one I have.
12. Most beautifully written book read in 2015?
The Mistletoe Bride and other Haunting Tales.  Absolutely stunning.
13. Most Thought-Provoking/ Life-Changing Book of 2015?
Into the Wild by Jon Krakauer.  I wasn’t expecting much but it’s really stuck with me since I finished it.  Christopher McCandless’ story is tragic but the detail that Krakauer enhances it with really make the book something really memorable.
14. Book you can’t believe you waited UNTIL 2015 to finally read?
The Colour of Magic by Terry Pratchett.  I’ve obviously read other Discworld novels but I haven’t ever read the first book before this year.  It was fun and witty and charming and everything I’ve come to expect from Terry Pratchett.

15. Favorite Passage/Quote From A Book You Read In 2015?
“The joy of life comes from our encounters with new experiences, and hence there is no greater joy than to have an endlessly changing horizon, for each day to have a new and different sun. If you want to get more out of life, you must lose your inclination for monotonous security and adopt a helter-skelter style of life that will at first appear to you to be crazy. But once you become accustomed to such a life you will see its full meaning and its incredible beauty” [Taken from a letter Christopher McCandless wrote to a friend from Into the Wild]
16.Shortest & Longest Book You Read In 2015?
Shortest:  Fables Volume 1: Legends in Exile by Bill Willingham (144 pages)
Longest:  War and Peace by Leo Tolstoy (1,024 pages)
17. Book That Shocked You The Most
The Dinner by Herman Koch.  That book is messed UP.
18. OTP OF THE YEAR (you will go down with this ship!)
(OTP = one true pairing if you aren’t familiar)
Still Jamie and Claire from the Outlander series.  I read the second book, Dragonfly in Amber, this year and I still love those two.  That is one hot Scot.
19. Favorite Non-Romantic Relationship Of The Year
I love the friendship between Celaena Sardothien and Lysandra in Queen of Shadows but I think they’re pipped at the post by Kelsier and Vin in The Final Empire by Brandon Sanderson.  In a lot of ways, it’s your normal mentor/mentee relationship but it’s perfect.

20. Favorite Book You Read in 2015 From An Author You’ve Read Previously
The Ballroom by Anna Hope.  I read Wake last year and loved it and The Ballroom has cemented Anna Hope as one of my favourite authors.  Her latest book is set in an asylum at the edge of the Yorkshire Moors in 1911.  Every week, the men and women meet in the ballroom and dance.  The blurb describes it as a “a tale of unlikely love and dangerous obsession, of madness and sanity, and of who gets to decide which is which“.  Couldn’t say it better myself.
21. Best Book You Read In 2015 That You Read Based SOLELY On A Recommendation From Somebody Else/Peer Pressure
Moby Dick by Herman Melville.  Shame on you, Hanna.  Shame on you.
22. Newest fictional crush from a book you read in 2015?
Rowan from Queen of Shadows.  I didn’t really get in in the third book but in the fourth, he’s frankly incredible.
23. Best 2015 debut you read?
I don’t think I actually read any.  Huh.
24. Best Worldbuilding/Most Vivid Setting You Read This Year?
The city of Luthadel and the magical system in The Final Empire were amazing.
25. Book That Put A Smile On Your Face/Was The Most FUN To Read?
Easy!  Ready Player One.  Next.
26. Book That Made You Cry Or Nearly Cry in 2015?
Oh, loads.  I do a lot of crying at books!  A Monster Calls by Patrick Ness completely slayed me.  To be fair, it’s a book about a young boy dealing with grief and anger while his mother is being treated for cancer so I should have guessed that I’d end up crying into my Kindle.  Add to that the fact that the story is based on an idea that Siobhan Dowd died before getting to write it herself.  It’s a real gut-puncher.

27. Hidden Gem Of The Year?
The Notable Brain of Maximilian Ponder by J. W. Ironmonger.  Hanna recommended it to me but I’ve never heard of it before or since so I’m still counting is a hidden gem.  It’s a really quirky story about a man who has killed his best friend and is about to cut out his brain.  The story is told in a haphazard manner, with memories woven together loosely and doled out between excerpts from Maximilian Ponder’s writings.
28. Book That Crushed Your Soul?
A Monster Calls.  Oof.
29. Most Unique Book You Read In 2015?
I’d have to go with The Notable Brain of Maximilian Ponder, again.
30. Book That Made You The Most Mad (doesn’t necessarily mean you didn’t like it)?
Moby Dick.  Someone needs to tell me why that utterly hateful book is a classic and why unsuspecting readers are still lead to believe that it’s worth reading.  Despicable.
HAPPY NEW YEAR, FRIENDS!  What were the highlights of your reading year?  Let me know what I need to have on my 2016 TBR pile!
Previous

Review: 'The Mistletoe Bride and Other Haunting Tales' by Kate Mosse