A couple of weeks ago, I turned 30.
I had a pretty fantastic time celebrating with friends and family (there was a heck of a lot of food and even more wine) but there’s still something about the big 3-0 that’s pretty unsettling.  I think because at 30, you’re indisputably an adult.  At 30, all of those questions that I could respond to with a “not until I’m in my 30s” (by which I mean those about children), I need a new answer to that isn’t just “shush”.
Things aren’t all scary.  I have a job that I love on a solid career path.  I own a house with a man who I’ll marry in less than a year’s time.  I really can’t complain.  And yet still I feel a bit weirded out by the milestone birthday.  Somebody at work was like, “Pfft – your early 30s will be the best.  It’s like your 20s but with money”.  Which is true but there’s a sense of big life changes just not being that far away…
The occasion was much improved by books (as so many occasions are).  I received some pretty damn brilliant birthday gifts from some pretty damn brilliant people (thank you!).  I had to work on my birthday because I’m low on annual leave this year after being paid out for a week when I left my old job in May.  I treated myself to some books to take the edge off. 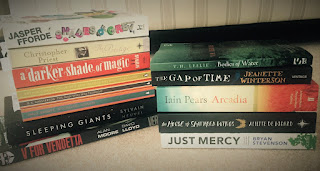 The pile on the left are the books that were gifted, the books on the right are the ones that I bought for myself.  SO from Hanna, Shades of Grey by Jasper Fforde, The Prestige by Christoper Priest and A Darker Shade of Magic by V. E. Schwab.  I’m really excited about all of them, obviously.  Hanna and I have pretty similar wishlists and I always send her books that I either have read and want to force her to read or ones that I haven’t read but that I really want to read and want to use her as a guinea pig.  Hanna adopts the same strategy and all is good in the world.  Shades of Grey and The Prestige both come highly recommended from Hanna and I really want to get to them soon.  A Darker Shade of Magic falls into the second category and was one I’d bought for Hanna for her birthday a couple of weeks earlier.  It looks super fun and Hanna’s beat me to reading it (and reviewing it) and even though she didn’t love it, I’m still planning on reading it soon because the idea just really intrigues me.

Laura added to my burgeoning Penguin English Library editions with Wuthering Heights by Emily Bronte and The Man Who Was Thursday by G. K. Chesterton.  I read Wuthering Heights absolutely years ago and I really want to re-read.  I love these editions and they look gorgeous all together.  I also really love the paper and how easy they are to read.  They’re the best.  I’ve never really heard much about The Man Who Was Thursday but there are secret policemen and an anarchist council and it sounds really, really good.

From lovely Ellie, The Five Orange Pips and Other Cases by Sir Arthur Conan Doyle and V for Vendetta by Alan Moore.  I love Sherlock Holmes (who doesn’t?) and Orange Pips are a PEL so I can’t wait to get stuck into it.  V for Vendetta is a graphic novel that I’ve been meaning to pick up ever since I started reading graphic novels and comics.  I love the film version and the graphic novel just looks incredible and comes Ellie Endorsed so I know I’m going to love it!

Katie picked one of the books on my wishlist I was the most excited about, Sleeping Giants by Sylvain Neuvel.  The hardback is absolutely stunning and it just sounds wonderfully quirky.  It’s about a girl who falls through the earth and lands on a giant hand.  I can’t wait to read this and have really high hopes for it.

For myself, I headed to Waterstones and took a bit of a gamble that my wishlist was up to date (I opened my gifts later on and figured I could always return/gift on my duplicates if the worst came to the worst).  It’s been ages since I just wandered around a bookshop and bought what I fancied so I had a wander around Leeds Waterstones.  I took my time and browsed and it was a super birthday treat.  I bought The Gap of Time by Jeanette Winterson (a retelling of Shakespeare’s The Winter’s Tale), Bodies of Water by V. H. Leslie (which I’ve heard nothing but incredible things about), Arcadia by Iain Pears (which a bookseller noticed I was carrying and stopped me to chat about how wonderful he’d thought it was, which cemented its place on my ‘to buy’ pile), The House of Shattered Wings by Aliette de Bodard (which is about angels I think and sounds like something a bit different) and Just Mercy by Bryan Stevenson (a non-fiction written by a lawyer in the US about his experiences of race and incarceration that I first saw on Mercy’s Bookish Musings and sounds fascinating).

WHEW!  That got long!  Massive thank you to everybody who sent me books 🙂  I have some real treats in store, I’m sure. Have you read any of these?  Any I absolutely have to pick up right away?
Previous