It’s been a long time since I over-indulged and revelled in the spoils of a good binge on books. Admittedly, that doesn’t involve the same satisfying clunk on the floor of a weighty bag of paperbacks these days but my Inbox was happy at least.
I’d forgotten how much fun it was to browse through lists of ‘potentials’ with the actual intention of buying some rather than just racking up even more of a wish list!

So here we are: the happiness that is my Tuesday evening 🙂

George R.R. Martin: A Game of Thrones; A Clash of Kings; A Storm of Swords 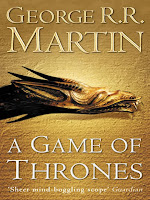 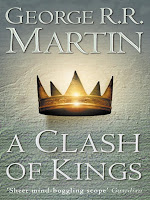 Yep, that’s right – I’ve never read anything by Martin and I’ve managed to purchase three of his A Song of Ice and Fire series. Have I mentioned lately that I have no self-control when it comes to fantasy series?! A heads up: this is a recurring theme…

Aren’t these covers so pretty?!

I’ve been dying to read something by Fiona McIntosh for a while this seemed like a good idea! This is, however, probably a much less well-known series so here’s the synopsis of the first book:

Fifteen-year-old Boaz is the new Zar, freshly ascended to his throne. In the turmoil following the old Zar’s death, courtiers jostle and conspire to secure their positions – not least his scheming mother, the new Valide. It seems his only genuine friends are his late father’s mad jester; Spur Lazar, head of Percheron’s security; and a golden beauty – a new odalisque purchased in the foothills as a slave for the harem. But can a madman, a soldier and a concubine be trusted to keep him safe from the Byzantine manoeuvres of his father’s ambitious entourage?

And last but I’m sure by no means least…

Ok, so I love these covers too! This, however, was a more rational purchase. I’ve been dying to read the end of Robert Jordan’s Wheel of Time series published with the help of Brandon Sanderson. Before I do, I want to get an idea of Sanderson’s style and this series always looks so tempting in bookshops that it seemed as good a place as any to try out Sanderson’s work. Did I really need to buy all three at once? No, no I did not. That isn’t, however, the voice of regret. Just my ever so slightly more sensible side trying to talk some sense into the book lover side. Fortunately the sensible side will never win and I get to keep buying series in abundance and being insanely gleeful about it.

Ok, enough excitement for one night! I’d love to hear about your recent indulgences too!! Make them as unncessarily extravagant as possible so that I can comfort myself and feel better 🙂