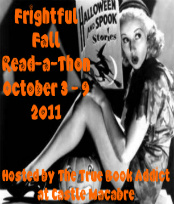 It turns out that this Read-A-Thon has for me been less about how much I’ve read and more about what I’ve read.
Number of books read:  Erm…almost 1!
Number of pages read:  311
I know, it’s teeny when compared to those who managed to read multiple books!
But, when I posted my sign-up post, I mentioned my history with Dracula and the irrational vampire phobia it engendered and how this Read-A-Thon was my kick up the behind.  Having now faced down the vast majority of this classic, I’m surprised to say that I’ve really enjoyed it so far!  Yes, I’ve had my moments when I’ve been home alone and it’s been dark and windy and I’ve had to draw all of the curtains in the vicinity and seek refuge in TV and, no, I won’t be enjoying the company of bats for the foreseeable future but the book is just so darn well written that it’s becoming easier to move past those bits!
On a related aside, having read this now I’m 25, I have no idea how much I can even have understood at 7 (I checked with my mum to make sure my recollection was right about the age).  I was always ahead in the ‘reading age’ tests at school but still can’t imagine how I managed to negotiate Stoker’s prose at that age.  Perhaps the version that I found was an abridged version or perhaps I was skipping over the parts that I didn’t understand and just grasped enough to appreciate what was scary.  Perhaps, even, I’m underestimating my seven-year-old self!  Obviously, I’ll never know but I do wonder…
I won’t be reviewing Dracula until about October 16th, as part of the October Group Read at A Literary Odyssey, but it’s been an excellent read so far and I’m mostly just kind of relieved that I haven’t been reduced to a quivering teary wreck (yet…)!
I know that Michelle (who blogs both at The True Book Addict and Castle Macabre) has put a ton of work into this Read-A-Thon so I owe most of my Dracula-defeating-gratitude to her – so THANKS!  I have most probably read the least of any of your participants but it’s been fun and I’ve found some great new blogs to follow so, all in all, a good reading/blogging week!
Previous

It's Monday! What Are You Reading? #2