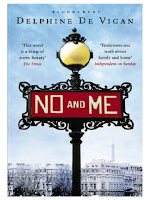 Published: by Bloomsbury Publishing in August 2010

What the blurb said:

Lou Bertignac has an IQ of 160 and a good friend in class rebel Lucas. At home her father puts a brave face on things but cries in secret in the bathroom, while her mother rarely speaks and hardly ever leaves the house. To escape this desolate world, Lou goes often to Gare d’Austerlitz to see the big emotions in the smiles and tears of arrival and departure. But there she also sees the homeless, meets a girl called No, only a few years older than herself, and decides to make homelessness the topic of her class presentation. Bit by bit, Lou and No become friends until, the project over, No disappears. Heartbroken, Lou asks her parents the unaskable question and her parents say: Yes, No can come to live with them. So Lou goes down into the underworld of Paris’s street people to bring her friend up to the light of a home and family life, she thinks.

What I would say:

I’ve seen a lot about this book on all kinds of blogs since it was published and I saw comments on plot, characters, style, cultural references…the list goes on. But nowhere did I see anything about how the novel deals with its key subject matter: homelessness. I’ll admit that part of the reason I loved this book so much was that it tackles the issue with sensitivity and understanding and I respect de Vigan so much for this.

I’ve struggled for some time since I finished this book on Friday about how to formulate this review because it is, after all, ‘only’ a novel. But it felt like a lot more than that to me. It forces you to look at how you respond to this emotive social issue but avoids being sanctimonious by a well judged ending. I wouldn’t have loved this book half as much if it had been all sunshine and light at the end and I think it would have been much less powerful.

Lou is an incredible choice for the novel’s narrator. At 13, she sees everything with moving simplicity. No is homeless. She has a home with a spare room. If No had a home, things would be better for her. The solution is simple to her – No lives in the spare room. I loved everything about her: her awkwardness; her compassion; her fragility and her unique kind of genius. What isn’t said by her is often painfully obvious to an adult reader by her observations and I adored her for her naivety. Most of all, though, I loved how she kept fighting and trying to understand No. I always find it upsetting when I hear people say, “Oh, it’s their own fault” or “They could always just get a job..” etc about homeless people and it was touchingly refreshing that this book bypassed that in Lou, who is almost baffled by how No came to be where she is:

“At what point is it too late? From what moment? The first time I met her? Six months ago, two years ago, five years? Can you get out of a fix like that? How do you find yourself at the age of eighteen out on the streets with nothing and no one?”

Although this is mostly about No and Lou, their relationships with Lou’s parents and Lucas lend brilliant support and Lou’s glimpses of others’ interactions are often revelations for the reader, if not always for Lou.

One more obvious point is that this is written by a French author and is set in Paris. I have read criticism of this book for making too many cultural references. I disagree. Paris is one of my favourite places to visit and every time I go I love it more so I would have been more than happy to lose myself in reminders of its streets – worry not, this isn’t the case. Amazingly, the book manages to depict the atmosphere of the city without making it a key factor. Part of the point of the book for me was that it could be any city in any country.

My favourite quote sums up the book, Lou and the issues they address perfectly:

“We can send supersonic planes into and rockets into space, and identify a criminal from a hair or a tiny flake of skin, and grow a
tomato you can keep in the fridge for three weeks without it getting a wrinkle, and store millions of pieces of information on a tiny chip. Yet we’re capable of letting people die in the street.”

Overall: This is in one way a very easy read – the narration is that of a teenager and is written in that style. It is, however, difficult to read without feeling somewhat guilty about the comfortable chair you’re reading it in or the steaming mug of coffee you’re sipping or the biscuits you’re chomping…and I couldn’t recommend it enough for that very reason!