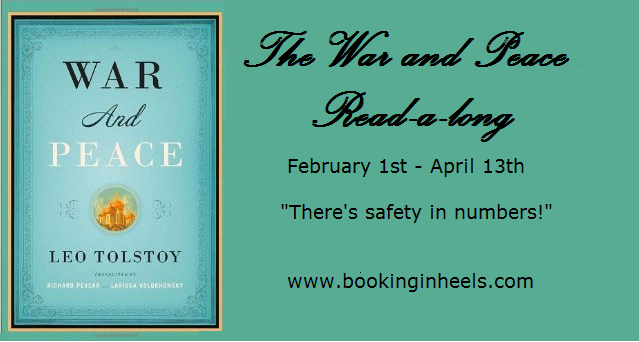 Thank goodness last week’s reading was another short one because CRIKEY, was it hard going at first!  I keep thinking that eventually I’ll get into the war chapters too and they’ll become easier to read but it just doesn’t seem to be happening.  Things picked up later on but it wasn’t easy sticking with it when I was being taunted by Fangirl sitting on my bedside table unfinished!
I don’t really feel as though I have much else to add this week so let’s get prompting.
1) Honestly, by this point in the book (55% or so), do you think War & Peace could have been shorter or did it need to be this long?
If anybody says that this book genuinely needed to be this long, they are crazy.  I think all of the character development will prove completely worth it and I haven’t resented any of it but the hunting, the creepy dancing, the slightly lecturing passages about Freemasons and the dream sequences I could live without.
2) Do you feel there’s been another change in tone? Why do you think Tolstoy keeps doing this? Do you like it?
I wonder if whether maybe this is sort of Tolstoy’s style?  Either that or he has a complete lack of focus and kept wandering off while he was writing.  The sections that I like the most are the ones where Tolstoy picks back up the thread of the characters’ stories and re-telling Russia’s history (when he’s being brief about it).  I know that I’m probably alone in this but although I’m not always a fan of his ramblings, I actually enjoyed Tolstoy’s musings on war…sorry about that…

“To us it is incomprehensible that millions of Christian men killed and tortured each other either because Napoleon was ambitious or Alexander was firm, or because England’s policy was astute or the Duke of Oldenburg wronged.  We cannot grasp what connection such circumstances have with the actual fact of slaughter and violence: why because the Duke was wronged, thousands of men from the other side of Europe killed and ruined the people of Smolensk and Moscow and were killed by them” [Loc 14706]

3) Natasha. AAAAAAAAAND GO.
She actually hasn’t really bothered me this week, although I’m not exactly a fan of her self-pity.  I’ve always quite liked the Rostovs but their pandering to her didn’t fill me with love.  Some of the commentary on doctors and medical treatment at the time was pretty amusing, though, so it stopped me getting too cranky.
The thing I can’t work out is where Natasha’s story is going.  To a convent maybe.  Or back to Andrew?  I don’t know.  Every time I think she’s grown up, she lets me down.  I hope that she’ll be a woman and go and apologise to Andrew and try to make things right rather than moaning at Pierre but somehow I expect that’s not what I’ll get…
4) Pierre has convinced himself (via numerology, obviously) that Napoleon is the Antichrist from The Book of Revelation. Is this in character for Pierre? How do you think he’ll act on this?
Ha – I thought that bit was completely random but also kind of brilliant.  The more I read about Pierre, the less I dislike him and the more entertaining I find him.  I still think he’s a complete burk but I somehow like reading about how he gets himself led into ridiculous situations or convinces himself of strange ideas, like numerical prophecies.  He seems to be getting more and more into slightly…quirky ideas and it wasn’t out of sync with his earlier sudden devotion to the Freemasons so I wasn’t surprised.  I would be surprised, however, if it resulted in concrete action.  I’m more expecting a lot of vague plan making, some ranting about his wife, some more weird obsessing over Natasha and some sending away of serfs to war before Pierre loses interest in the idea and goes back to just spending his money on drink and cards.
I have a lot of travelling coming up over the next few days so I’m hoping to make decent progress on Book Ten so that I can squeeze in something else.  Maybe The Colour of Magic so that I can contribute in a tiny way to the lovely series of posts that Bex has running (find her Pratchett Reading Week original post HERE).
Previous

Review-Ramble Hybrid: 'The Colour of Magic' by Terry Pratchett