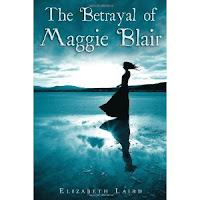 The Synopsis (taken from Amazon.co.uk)

In seventeenth-century Scotland, saying the wrong thing can lead to banishment—or worse. Accused of being a witch, sixteen-year-old Maggie Blair is sentenced to be hanged. She escapes, but instead of finding shelter with her principled, patriotic uncle, she brings disaster to his door.

Betrayed by one of her own accusers, Maggie must try to save her uncle and his family from the king’s men, even if she has to risk her own life in the process.

There was something about Maggie Blair, the character, that I couldn’t help but love. She was one of those people who is full of tenacity, loyalty and just the right amount of innocence. Maggie has grown up with her grandmother after both of her parents die. Her grandmother is bitter and full of anger at the world in general, some of which she takes out on the poor young Maggie. In a fit of fury, Maggie’s grandmother yells a curse at the parents of a new-born baby. When the baby unfortunately dies, the already ‘on edge’ community on the Isle of Bute are encouraged into cries of withcraft.

The turning of the community to superstition and anger was well handled and the emotions were genuinely portrayed. The harmless workers of Bute are roused by venomous accusations and descend into an angry mob. Driven by her own selfishness, the servant of the bereaved spins a tall tale of devil worship and the occult. I’d love to say that was the end of Annie’s malevolence but where would the story be then…?

Shortly after the “trial”, Maggie is forced to flee in search of the only family she has left. Her strength in the face of heartbreak was the point that I realised I was really caught up in the novel. When Maggie finds the family she has been searching for, she has to learn more about herself and about how to find somewhere to fit in.

Combined with this ‘coming of age’ tale is the story of the Covenantors – a 17th century group of Presbytarians that fought the efforts of the English king, Charles I, to govern how they lived and worshipped. The history of such a noble group of people who went through a great deal for the right of their families to express their religion freely is obviously one of sacrifice and it was portrayed through the Blair family wonderfully sensitively. It was a period of history I only knew a little about and this book manages to weave enough detail into the narrative without intruding on the characters or the story.

If I have a tiny criticism, it’s that Maggie seemed to me to be a lot younger than 16 but, hey, that could well be because I’m older than I care to admit and have forgotten what the world felt like at 16!

Overall: A nice story of friendship, solidarity and what one young girl will do to feel as though she has a home and some peace. I would recommend this book as a quick read that tugs at the old heart strings and educates in equal measure. A snapshot of a turbulent and atmospheric Scotland that is perfect for a rainy afternoon!

When is enough, enough?

Drifting back to my bookish 'home'